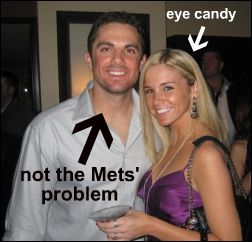 I took the last couple of days off from writing for a couple of reasons. Primarily it was to just take a mental breather from the madness of the Mets' season. Writing about the Mets day in and day out can be suffocating in a lot of ways, especially to my psychological well being. Though you didn't necessarily plan on doing so, you guys filled in for me with a couple of posts I promoted to the front page as well as a number of other FanPosts and FanShots. One of the greatest assets of a community such as this one is that I could literally disappear for a day or two and you'd hardly notice because you're all capable of generating brilliant, original content of your own on a seemingly daily basis. So, keep on rockin' it because I'll keep promoting it.

Anyway, since we last spoke we've seen a lot of shoddy journalistic efforts (not here) that purport to fix the Mets by breaking up their core of incredible, young talent because of some perceived lack of "heart" or "guts" or whatever meaningless baseball platitude they thought might make good copy. I can find some merit in almost any makeover plan, even if I don't necessarily agree with all of the tactics of reconstruction. Whatever the Mets' shortcomings this past season, whatever areas are in need of overhaul to varying degrees, the following players had better be on the team when the team takes to Citi Field next spring:

Whatever reasons you can concoct for why the Mets didn't make the playoffs this season -- injuries, porous bullpen, lack of positional depth, age-related regression -- these five players are part of the solution, not part of the problem. Even if Bob Klapisch doesn't understand this, I do believe that Omar Minaya does. Whatever his failings as a general manager, he understands the value of superstars -- especially young-ish ones -- and the Mets have four of them and a burgeoning star in Pelfrey. If you want to find the problems with this roster, look elsewhere. There's nothing to see here.

I don't want to hear that these players aren't clutch or that they don't know how to win, that the current core can't get it done or that they've somehow established a culture of losing in Queens. Those words don't mean anything to me. If you think he sucks, tell me why he sucks. Don't speak subjectively about character-based intangibles which, even if they did exist and had perceptible value, a sportswriter (or any writer) would have no business understanding anyway. Explain in what tangible areas these players are lacking and the realistic scenarios in which the Mets might dispense with them and actually receive reasonable value in return. The obvious explanation is that such scenarios don't actually exist, which is exactly why sportswriters fall back on the aforementioned tired baseball platitudes to support their irrational ideas in the first place.