Share All sharing options for: 2008 Mets Post-Mortem: The Ballad of Luis Castillo 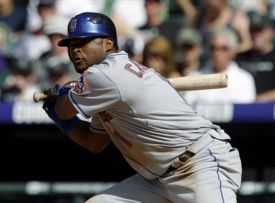 If you were asked to guess the player with the highest walk rate (BB%) among Met hitters with at least 100 plate appearances in 2008, who might you throw out there? Carlos Beltran walks a lot, and he'd likely be my guess. David Wright also has great plate discipline, so he'd probably be a solid choice. Neither? Hmm. I see where this is going. Someone not-so-obvious. Got it: Dan Murphy. No? Gah, !@#$ me. Fine, who?

Bingo. He-Who-Must-Not-Be-Named, the player who seems to be universally hated by fans and management alike, whose name precedes some variant of "absolutely has to be traded" on almost every Mets offseason wishlist, was the most disciplined hitter the Mets had this year. Care to guess how many regular second basemen walked at a better rate than Castillo? Zero. Or how many non-OF/1B/DH types did so? Four: Dave Ross, Chipper Jones, Craig Counsell and Ramon Santiago. Castillo's 14.4% BB% was 28th in all of baseball and his 1.43 BB/K rate (walks per strikeout) was 6th in the majors. He also stole 17 bases in 19 attempts, which is kind of astounding considering how hobbled he looked most of the time.

Of course, he doesn't hit for any power and his defense was terrible last year (his .751 RZR would have ranked dead last among NL second basemen had he played enough innings to qualify), though he has historically been a pretty good defensive player, and his lack of range this past season can certainly be attributed in part to his bad knees. There's no guarantee that his knees have gotten appreciably better, but he seemed to move around a bit better late in the season, whatever that's worth.

If we are to believe what we hear, the Mets may look to dump Castillo this offseason. Personally, I think that'd be a mistake, especially if they'd have to take on some other bad contract in return. Castillo is nothing special, but a second baseman who can steal bases and draw walks as Castillo can has plenty of value. That doesn't acquit Omar Minaya of signing him to that horrible contract, but if Castillo can stay somewhat healthy he is something quite different from useless. He's not Chase Utley or Dan Uggla, but he's also not what's holding the Mets back from becoming a championship team.

Who might be out there to replace Castillo if the Mets decided to trade him or relegate him to $6 million pinch-hitting duties? Orlando Hudson's name gets thrown around, though RZR rates his defense as one of the worst in the National League over the past three seasons, including dead last in 2008. His bat would be a huge upgrade over Castillo's, but at what cost? Four years and $40 million, plus the Mets' first round draft pick (or second-rounder, if their first goes to the Dodgers or Brewers or whomever else)?

The Mets might be better off trying to finagle a trade for the Orioles' Brian Roberts, who has been good-to-great defensively, draws plenty of walks, hits for some power, and is a prolific base-stealer. Roberts is set to make $8 million in 2009 in the final year of a two-year extension he signed in 2007. The Cubs tried relentlessly to pry Roberts from the O's last offseason to no avail, though Baltimore may be more inclined to trade Roberts this winter if they thought:

(a) they had no chance of competing in 2009 (they don't), and
(b) they could get something of substance in return

I don't know if that means the Mets would have to give up a Jon Niese or a Fernando Martinez to get someone of Roberts's talents, but I would at least try like hell to make something happen. I've personally been a big fan of Roberts's for three or four years now, hoping he'd find his way into a Mets uniform one of these days.

Internally, the Mets don't have a lot of options. Actually, that's not really true; they have options, they're just mostly terrible ones. Argenis Reyes is pretty clearly not the answer. He's almost as bad a hitter as Anderson Hernandez was in his time with the Mets, and the novelty of having a Reyes-Reyes double-play combination does not offset the fact that Argenis brings zero to the table offensively. Damion Easley is a free agent, and I'd be surprised (disappointed?) if the Mets brought him back. He had a nice year with them in 2007 and a couple of big moments in 2008, but for the most part he was either hurt or unproductive for the better part of the season. He'll also be 39 in November.

The only interesting name within the Mets' organization who could conceivably help the Mets next season is Daniel Murphy, who is currently seeing playing time at second base in the Arizona Fall League. The Mets have said that they have no intention of moving him to 2B in 2009, but my guess is that the front office is simply hedging its bets in case Murphy is a complete disaster at the keystone. Odds are good that Murphy will be pretty bad, as he's moving from an easier defensive position (left field, or even third base which he played in the minors) to a much more difficult one. However, if Murphy turns out to be even adequate defensively at second base, the Mets will have found a real gem. His bat doesn't appear to be strong enough to carry a corner outfield spot, but it would be plenty productive at second, and the Mets would have a young, cheap, homegrown talent to go along with David Wright and Jose Reyes in the infield for years to come. Don't pencil him in just yet; he's still a long shot to be anything more than a failed experiment.

At all events, if we enumerate the Mets' shortcomings in 2008, lack of a solid second baseman would not be especially high on that list. Sure, every bit helps, but pitching -- both starting and relieving -- will have to be the priorities this offseason. If something falls in their lap to improve the team at second base, gravy, but I don't expect the Mets to spend a whole lot of time worrying about it.