2008 Mets Post-Mortem: The Cost Of Injuries

Share All sharing options for: 2008 Mets Post-Mortem: The Cost Of Injuries 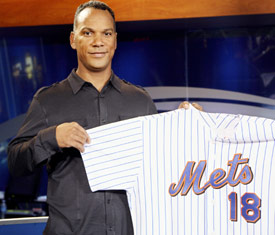 If you want to know how a team with a $138 million payroll can miss the playoffs, take a gander at the lineup. Not that one. I mean the one in queue outside the trainer's room. Injuries are a part of the game, and some players certainly carry higher risks of injury than others. Older players and players with prior health problems are obvious candidates for a trip or two to the disabled list. Especially high-risk individuals are those injury double-threats: Aging players who have a laundry list of past ailments and afflictions (see: Alou, Moises).

Every team suffers its share of games lost to the disabled list. The Yankees had Jorge Posada, Chien-Ming Wang and Joba Chamberlain all spend time on the shelf; the Red Sox missed David Ortiz, Josh Beckett and Curt Schilling for varying lengths of time; the Braves missed Chipper Jones, Tim Hudson, John Smoltz and Tom Glavine at one point or another, so the Mets clearly aren't on an island with respect to busted goods.

I wanted to know exactly how many man-games the Mets lost due to injury this season. So, armed with their transaction ledger, salary data, schedule and my trusty spreadsheet, I had a look-see at how many games individual Mets players missed while on the disabled list. A few caveats:

Having said that, here are the results:

Keep in mind that I only included players whom the Mets could have reasonably expected to be on their 25-man roster for the whole season. Here's the positional breakdown:

Even with all of these injuries the Mets still had a great chance to make the playoffs this season. I'd be making excuses if I blamed their having fallen short on bad health, though it'd be equally naive to suggest that their physical breakdowns didn't play any role in their ultimate demise. To have four players from your would-be active roster miss at least 125 games apiece and not have your record suffer to some degree is unrealistic. Plenty of blame still falls on Omar Minaya for not having reasonable contingency plans for some of these guys, most notably Alou and Hernandez, who were safe bets to miss significant time in any given year. Still, a little more luck in the health department and we might not be grinding our teeth bitterly as we watch other teams take their hacks at baseball history.