Much the way he did for other big free agents like Alex Rodriguez and Johnny Damon, Scott Boras's agency has put together a comprehensive (and in many cases, wildly misleading) "book" on Oliver Perez. The book is divided into eight chapters with astonishingly optimistic titles like "Perez Turns Corner in 2006," "Perez Is One of Baseball’s Top 5 Left-Handed Starting Pitchers," "A Rare Young Left-Handed Starting Pitcher Available on the Free-Agent Market," "Big-Game Ollie," and "Durable Ollie." Michael Smith of the New York Times has more:

In the chapter "Perez Turns Corner in 2006," charts are used to argue that the pitching statistics for Perez, who is now 27, are similar to those of Randy Johnson and the Hall-of-Fame pitcher Sandy Koufax at the same age. What’s more, the charts argue that Perez’s control problems will improve, just like they did for Koufax and Johnson as they got older. 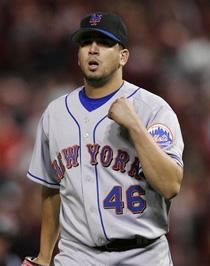 Randy Johnson is just a terrible comparison, as Unit didn't pitch his first full season until he was 25; Perez had already pitched four half or full seasons by that age. They're both lefties who are/were prone to wildness, but these two are really apples-and-pears.

Koufax is actually sort of interesting here. Koufax began his big league career at age 19, Perez at 20. Both had high strikeout rates but terrible control in their early years. Through age 24, both had turned in so-so careers (though Perez had a brilliant season at age 22; Koufax had no such season early on).

At age 25, each pitcher turned in a very good season, with an ERA around 20% better than the league (Koufax at 123 ERA+; Perez at 120 ERA+). Both had strong strikeout rates and somewhat improved walk rates.

Here's where the paths diverge, albeit for just one season to this point. At age 26, Koufax notched an ERA 41% better than the league and posted a strikeout-to-walk ratio of almost four-to-one (216-to-57). His WHIP was just a shade over one. Perez, on the other hand, posted an ERA exactly the same as the rest of the league, had a strikeout-to-walk ratio worse than two-to-one (180-to-105), and had a WHIP north of 1.4.

Koufax's next four years represented one of the most ungodly stretches in baseball history, recording ERA+ marks of 159, 187, 160 and 190, all WHIPs under one, amazing strikeout and walk rates and almost 300 innings per season. Oliver Perez will replicate none of those.

If we bring this conversation back around to Johnson, the Mets would be much better off signing Big Unit to a one-year deal than Oliver Perez to a five-year deal at whatever absurd annual salary Boras will be demanding.