Apparently, John Smoltz is considering signing with the Mets. Signing John Smoltz would be an excellent move, for all sorts of reasons.

First of all, John Smoltz is not Tom Glavine. Before his injury last year, Smoltz pitched 28 innings, struck out 36, and walked just 8. Glavine pitched a shade over 60 innings before his injury, with a 37K/37BB. The things they have in common are old-age, injury-risk, and great legacies with the Braves. Although there may be no three things Mets fans are more disgusted with, the fundamental difference between the two is Smoltz is still good, really good, while Glavine sucks and should retire. I know many Mets fans unfairly view Glavine as some sort of traitor who waited 4 years to sabatoge the Mets. Besides being insanely stupid on its own, this assumption is not a reason to dislike Smoltz. He’s considering the Mets because he wants to win a championship. 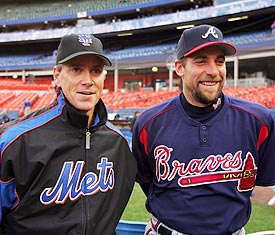 With that out of the way, let’s consider Smoltz’s value to the Mets. He’s not a solution for the rotation. He is old and injury prone. His appeal to the Mets should be as a fifth starter, who if hurt, can be replaced by Niese. The innings he does provide as a starter, however, are almost guaranteed to be high quality, way better than your average 5th starter. The hidden beauty of this plan is Smoltz’s tendency to become a power reliever when he gets hurt, as he famously did for years at a time with the Braves. Smoltz’s arsenal allows him to become a 99-mph fastball, slider pitcher when he needs to reduce his innings. So let’s assume he pitches 120 innings next year. Being replaced by relievers, and becoming a reliever himself, I’ll say it’s 60/60 innings replacement for starters/relievers. Marcels has Smoltz at a 3.50 FIP, and 5.50 FIP as the average starter and 4.50 FIP for relievers. After a quick search for my calculator, we discover Smoltz is 20 runs above average, so +2 wins above replacement level.

Assuming each win is worth 5 million dollars, he’s worth 10MM, although he’ll probably sign for something closer to 5MM. He’s a player who fills two of the Mets needs: starting depth and power relief and will probably sign for half his worth. Please find it in your heart to accept one more former Brave.