What Trading For J.J. Putz Means For The Mets

Share All sharing options for: What Trading For J.J. Putz Means For The Mets 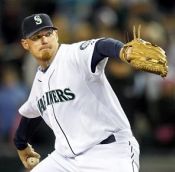 Assuming good health, the Mets' acquisition of J.J. Putz (pŏŏts) gives them the best tandem relief corps in baseball, and in the last three days Omar Minaya has moved mountains (where mountains = piles of cash and prospects) to address the team's most conspicuous shortcoming from the past two seasons.

There will be plenty of debate over who won this deal or, specifically, if the Mets did well for themselves here. What is clear is that the Mets improved themselves for 2009 -- considerably so, one could argue -- and that they have turned a glaring weakness into an obvious strength in a very short period of time.

After the trade was finalized, there was some instant concern that Putz might not actually be so keen on setting up, considering that he was arguably the best reliever in baseball in 2006 and 2007. I was happy to learn that Putz is okay with the situation, and he certainly seems excited to dive into a pennant race.

Having two legitimate closers in the bullpen is a luxury, but it shouldn't be considered overkill for a couple of important reasons.

I absolutely hate losing Endy Chavez. He's a superlative fielder and a bleh hitter, but he's valuable enough to justify keeping around for more than nostalgic/irrational Endy-love reasons. Jeremy Reed was once a top prospect who will replace Endy's performance for the most part, even if his intangible awesomeness will be woefully inadequate.

Sean Green replaces Joe Smith, and despite giving up five years in age, the net effect on the Mets' bullpen is negligible.

As for the prospects, I like Mike Carp more than most do, but he struggles against lefties and he hasn't showed enough power yet to get anyone especially excited. Jason Vargas is dreck, and neither Maikel Cleto nor Ezequiel Carrera is going to have an impact any time soon, if at all (Cleto is interesting for his high-nineties fastball, but his breaking ball is blah).

Aaron Heilman and his tight, tight pants have found a new home in Seattle, and I wish him well. I supported him far longer than was reasonable, and I still support him, though even I'll admit that it was time for a change. He wanted to be a starter, but the Mets wanted him in the bullpen and Heilman did what he was told. Even after his most miserable failures on the mound, he answered questions politely and never blamed anyone else for his mistakes. You can certainly argue that he should do those things anyway, but in a league where a lot of players are reluctant to talk about the bad times, Heilman was always a man about those things.

Getting back to Putz, the biggest concern there is health, as he missed time in 2008 with rib cage inflammation and a hyper-extended pitching elbow. His post-injury numbers were very good, though he was plagued by some control problems that were entirely absent during his dominant seasons in 2006 and 2007. We can chalk some of it up to a bit of rust, and even if he has lost some of his command he will still be a great pitcher, if not the utterly sublime reliever he once was.

Want some outside perspective on the deal? Keith Law likes the trade for the Mets. Ditto Dan Szymborski. Matthew Carruth at FanGraphs agrees. Lookout Landing has Mariner fan reaction. Let's Go Tribe does likewise for the Indians.

As with all trades, this one will be judged twice: Once at inception and again in retrospect once all of the principals have settled and established themselves (or not). The latter will have to wait, but in the case of the former, I think the Mets are a clear winner here.