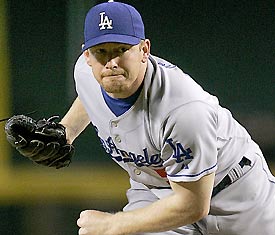 At least ostensibly, the Mets have been showing interest in staggeringly unsexy free agent lefty Randy Wolf, most recently of the Astros (and Padres). Marty Noble, by way of a folded note he intercepted in Mrs. Stephenson's third-period geometry class, passed word of the Mets' fancy to Wolf himself, who promptly blushed and pulled closed his hoodie just as tightly as he could.

Before posting a 3.57 ERA in 70.2 innings with the Astros last season after coming over in a deadline deal with the Padres, Wolf hadn't notched a park-adjusted ERA better than the league since 2004 and he hasn't pitched more than 200 innings since 2002 (I cheated a bit, because he had an ERA+ of exactly 100 in 2005 and threw exactly 200 innings in 2003). To be fair, he was actually pretty good with the Dodgers in 2007, recording a FIP of 3.99 and a tRA+ of 111, but there really hasn't been anything else to write home about in about a half-decade.

The two important questions Mets fans should be asking themselves are:

I'm not so worried about #1, unless of course #2 doesn't break the way I'm imagining it will. Let's assume that the Mets are actually keen on signing Wolf, irrespective of their desire to sign someone else (i.e. and e.g. they might want Wolf AND Lowe), what role do they actually expect Wolf to fill on their 2009 roster? He has a checkered injury history, and even when healthy he hasn't exactly been a workhorse. More importantly, I think, is that he isn't really talented enough to be a mid-rotation starter. If he can be something like an average pitcher (or even a bit worse), that's not so bad for a team's fifth starter. Most teams have sheer dreck manning that spot, so anything remotely competent and moderately consistent would qualify as a leg up on the majority of the league.

Nevertheless, I have to think that Omar Minaya is setting his sights higher than Perez, Wolf and maybe Jon Niese to round out the rotation. Even if John Maine is healthy, re-signing Perez and inking someone like Wolf doesn't represent any kind of meaningful upgrade over the Mets' rotation from 2008. And if that's the plan, then, well, !@#$ the heck? Mets starters had the fifth-best ERA in the National League last year, to go along with the sixth-best FIP. Those aren't terrible by any stretch, but I think we'll all agree that there's some room for improvement. While Pelfrey could be better in 2009, Johan Santana probably won't be, Wolf almost certainly won't be, and who knows what to expect from Maine and Perez?

I think the salient point to take away from all of this rambling is that the Mets are in a position, again, to compete for a division title, and there are still starting pitchers out there that can make a real difference to the team in 2009. Why diddle around with someone who represents a marginal upgrade at best when you have the opportunity and, presumably, the wherewithal, to shoot the moon and do something that will have a substantial and measurable impact on team success next year and beyond?