Are You Better Than Brandon Knight?

Share All sharing options for: Are You Better Than Brandon Knight? 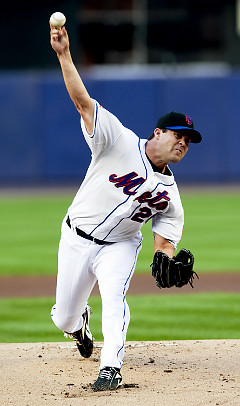 Brandon Knight, a Rangers' draftee in 1995, progressed quickly through the minors before hitting a wall in AAA at age 23. After being traded to the Yankees, Knight seemingly got it together, dominating AAA at age 25. Without getting a fair shot, however, Knight existed in baseball purgatory signing with the Nippon Ham Fighters of Japan, the Somerset Patriots of the Atlantic League, and the Pittsburgh Pirates.

After signing a Minor League deal with the Mets at age 32, Knight dominated in AAA New Orleans as both a reliever and a starter, striking out 55 in 43 innings with a 2.28 ERA. His performance earned him a trip to the 2008 Olympics and spot-duty with the Mets. Not bad for a guy about to quit baseball.

In some ways he's the Val Pascucci of pitching. Does that mean he's good, or worth a shot in 2008? Let's see how he stacks up to popular free agent starters using Marcels projections. Knight projects for a 4.31 FIP with a 7.0 K/9 and a 3.7 BB/9. For our purposes we'll stretch these numbers over 180 innings, compare them to 180 innings of the big-name free agents.

Our first contestant, hailing from Valencia, CA, weighs in at 210 pounds. With a projected FIP 4.43 4.7 K/9, he falls short of Brandon by about 50 strikeouts and roughly 2 runs. It was close, but Jon Garland is not better than Brandon Knight.

The next guy, who most of you will only accept as a fifth starter, projects for a 4.29 FIP. Congratulations Randy Wolf, you are basically Brandon Knight. Same goes for Jonathan Niese and his projected 4.32 FIP.

The perceived best options of this free agent class, however, are a different story. I don't need to tell you this, but Derek Lowe is better than Brandon Knight. In fact he's close to 15 runs or 1.5 wins better. The guy many consider second-best to Lowe, however, rates about half a win worse than Knight. You're not Sandy Koufax, Ollie. Hell, you're not even Brandon Knight.

Does this mean I think Brandon Knight is necessarily a better 4th starter option than Oliver Perez? No, these are just projections placed in a certain context for the sake of argument. Knight's first major league start came last year, with the Mets at age 32. Preferring the 26 year old, who's seemingly been around forever, over the 33 year-old reliever-made starter, is a very defensible position. But when you look at the money these marginal starters are demanding, the idea of focusing on Lowe and then turning in-house sounds much better.