Share All sharing options for: Opening Day Is 'Ere 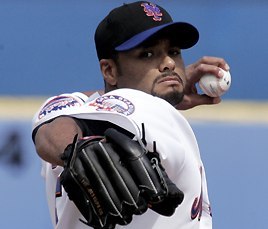 An awful lot has transpired since The Collapse™ last September, and in a few short hours we will finally join the rest of the space-time continuum by putting 2007's bitter ending behind us. The magnitude of The Collapse™ and its place in baseball history should be forgotten now; whether the pain stuck with you for hours or days or months can fade back into irrelevance along with the useless husk of Fernando Tatis's career. It's over; now let's move on.

The page was officially turned for many of us when the Mets acquired Johan Santana two months ago. His arrival didn't change the events of last season, but it did occupy a spot in our conscience of such considerable width and breadth as to displace those depressing thoughts to a ne'er-searched and mite-filled corner of our minds. As important, the local and national media had something to write about regarding the Mets that didn't involve the words "Worst" and "In Baseball History". At the time, the Mets' offseason was decidedly uninspiring: the regrettable trade of Lastings Milledge and a puzzling four-year pact with an aging Luis Castillo were all we had to show for nearly four months of offseason. Santana changed all of that; the Mets became relevant again and many of us actually began to look forward to this year's spring training.

Now that the season is upon us we can find out whether the Mets's paper airplane will soar atop the NL East or crash land into mediocrity. The pundits and projectioners see good things happening, but Mets fans know better than to count their chickens before they've hatched. This team has been built for a championship, but things can still go awry. The offense, especially absent Moises Alou, has some holes. Carlos Delgado is a big unknown, and we would only be guessing if we pegged him for rebound over regression. The corner outfield spots are question marks; will Ryan Church hit lefties? Will Endy Chavez or Angel Pagan hit at all? I don't even want to talk about the catching crapshoot.

The offense is not all bad, though. The Mets will be at or near the top of the league in production at shortstop, third base and in centerfield, where their young nucleus will be counted on to shoulder the offensive load. To get such offense at three premium defensive positions is a luxury, and the Mets will hold a real advantage there over their closest rivals. In many ways their offensive core is inverted; most teams get the majority of their run production out of first base and the outfield corners, relying more heavily on defense everywhere else. The Mets have it backwards, though, and if they can get anything approaching league-average offense at those other positions -- Moises Alou's eventual return will help with that -- they can leverage their advantage at the other positions to beat up on the rest of their division.

Offense aside, the Mets will lean on their pitching staff for success this year, with Santana's presence strenghening the top spot as well as the rest of the rotation. Pedro Martinez could be the best number-two in the league; John Maine is going to have a huge year. Oliver Perez is in the walk year of his contract and is a Scott Boras client; look for some gaudy contract year numbers there. The Mets have some iffiness in the fifth spot, but who doesn't? Given health, the Mets have the best starting rotation in the National League and, whether or not pitching actually wins championships, now allowing runs is one of the two most important things a team can do to improve their chances of victory.

Beyond the starters, the front end of the bullpen is strong; the back is not terrific, but it's not dreadful, either. Scott Schoeneweis and Joe Smith can be productive if used almost exclusively according to their respective platoon advantages. Cheat sheet for Willie Randolph: this means Smith pitches against righties and Show against lefties. Write it down, man; it isn't that hard.

Speaking of Willie, he and Omar Minaya may be on the hot seat if the season heads south in a hurry. Will they begin to manage/general manage as if their jobs are on the line? Does Fernando Martinez get traded for Xavier Nady at the July deadline?

Your season has come? Perhaps. The team, the time, the Mets? I guess. The Mets have thankfully eschewed their hokey slogans in favor of just trying to put the best product they can on the field and let the rest sort itself out. They're going to sell upwards of four million tickets this year with or without the tired baseball platitudes, so it's nice to see that they will finally let the players do what they do best and let the marketing department busy themselves selling foam fingers and bumper stickers.

Baseball is in the air. Opening Day is here. Let's go Mets!