Review: Mets By The Numbers

Share All sharing options for: Review: Mets By The Numbers 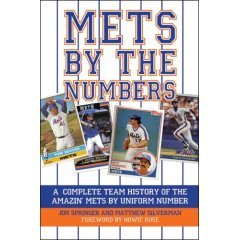 There are probably dozens of new Mets books published every year, and most of them are redeeming to varying degrees. I recently* got my hands on a copy of Mets By The Numbers, the softcover companion piece to the wonderful Mets By The Numbers website and blog.

*This is a lie. It's been sitting on my desk for a couple of months. I regret not writing it up sooner, but one thing or another always seemed to push it off my plate. I apologize to the authors and especially to their publicist Jen, who has made it her life's work to make sure that this write-up gets posted. Thanks, Jen!

Mets By The Numbers (MBTN) is, at its essence, the history of the Mets. Where MBTN differs -- and ultimately sets it apart from other Mets histories -- is its format. As you can probably gather from the title, MBTN is about numbers. Not stats, but uniform numbers, and the stories of the men who wore those numbers. So, rather than telling the story of the Mets chronologically, the book's authors -- Jon Springer and Matthew Silverman -- use ascending numeric delineation to weave their narrative. In other words, one chapter per uniform number.

Given the book's unique structure, it would have been very easy for each chapter to devolve into a tired roll-call, blandly cataloging every player to don a particular uniform. The authors deftly avoided that particular pratfall by interjecting humor with history, and leaving us with a chapter-long capsule for every number ever worn.

The book really shines when its spotlight is on the also-rans. Anyone can make Tom Seaver or Mike Piazza seem interesting, but one of the most enjoyable parts of the book for me was reading and subsequently ruminating on the tales of the less-than-stars. Some examples:

Luis Lopez (1997-99) filled in for Rey Ordonez at shortstop, out-hit Rey-Rey as a Met (.250 to .245), and punched the Gold Glover on the team bus, which was something everyone wished they'd done when Ordonez later called the Shea fans "stupid". Lopez was part of two shocking developments on September 14, 1997. First, he started the game wearing 17 on "Keith Hernandez Day" when many fans hoped the number might be put in storage to honor Mex (it was the same year Jackie Robinson's 42 was retired at a Shea ceremony). Second, the banjo-hitting Lopez socked a homer for the only run in a 1-0 win that afternoon.

Pete Harnisch (1995-97) briefly assumed No. 1 starter duties, but he was no Tom Seaver. He was no Craig Swan (ed note: also #27), even. The Long Island native battled depression and tobacco withdrawal while clashing badly with manager Bobby Valentine.

Sidearmer Jeff Innis (1987-93) was a beguiler in the Mets' bullpen and [a] good clubhouse interview. He was the first Met whose last name began withI, and while, of course there's no "I" in team, there was plenty of team in Innis, who gamely led the Mets in appearances during the sorry seasons of 1993-93.

Of course, the book has great stories about David Wright, Howard Johnson, Gary Carter et al, so if you want to read about the big boys they're definitely in there.

If you're looking to bone up on your Mets history, want to share the team's stories with a friend or family member, or just want some Mets reading to pass the time when there's nothing new to read here, go pick up Mets By The Numbers. It's ten bucks at Amazon, a steal at twice the price.