Does the Fun Ever Start?

Share All sharing options for: Does the Fun Ever Start? 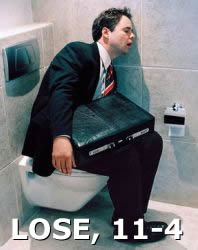 With Wednesday night's loss to the Braves, the Mets have hit the .500 mark for the seventh time this season, a number as good as any to paint the picture of the 2008 club. For the third straight game the Mets' offense was anemic, the pitching and defense inept. I think we all had high hopes for the Mets this season, what with the megabucks that were given to Johan Santana and the (presumed) continued development of David Wright and Jose Reyes. Sure, the late-season collapse in 2007 was still fresh in our minds, but there were plenty of reasons to be optimistic that the Mets would put that debacle behind them.

Yet here we are, forty-four games into the season and the Mets are right where they started at the end of March: proud owners of as many wins as they have losses. Of course, the Mets are now 3.5 games -- and three teams -- back of first place in the NL East, so it's not as if we have simply reset the clock on the season. The Mets are in the middle of the pack among NL teams in runs scored and runs allowed, though it's the offense that has been most guilty of underperforming expectations.

Whatever, we know that some of these guys aren't hitting as well as they should be, Beltran, Wright and Reyes especially. Some of these guys are reaching the ends of their rope: Delgado, I'm looking at you. We can only bemoan their slow start for so long. We're nearing the end of the season's second month, and at some point the 'Underachiever' tag has to be replaced with one reading 'Just not that good'.

I guess the Mets can consider themselves fortunate that, despite their woeful mediocrity, they are still within pissing distance of the top of their division. The Braves have a considerably better run differential than anyone else in the NL East, but they have had plenty of their own problems. The Phillies have a number of pitching issues, and Ryan Howard is hitting less than .200/.300/.400. The Marlins have exceeded every expectation but I still have a hard time believing their hitters' incredible fortune on balls in play will continue much longer.

None of that means anything if the Mets don't start playing better. The mini-series at Yankee Stadium was encouraging, but that tiny spurt of impressive play is a distant memory after the suckfest we're witnessing in Atlanta. You know things have gotten bad when Marlon Anderson and Endy Chavez are your corner outfielders, evoking memories of that pitiful outfield that the Mets dragged all the way to the 2000 World Series.

I want to say that the Mets need to turn things around soon if they want any chance of salvaging this season, but I don't even know if that's accurate. The rest of the division is iffy enough that the Mets could slog along for another couple of months, winning approximately as often as they lose, and still remain a stone's throw from first place. That's not to say it'll be fun to watch; two months of this and I already want to commit Harikari.