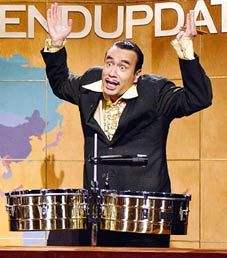 So we decided to have some fun over at MetsGeek by rechristening the site "RaysGeek" in celebration of our favorite Floridian franchise. I dummied up a new banner and Alex wrote a nice message welcoming everyone to the new site. We found the whole thing pretty amusing, and figured the change of scenery would bring some levity to an otherwise morose situation. Most folks, especially the MG regulars, got the gag and enjoyed it. I guess fittingly, the little gag netted MG one of its biggest traffic days ever.

It wasn't all fun and games, though, as I received at least a couple of e-mails from angry readers who were outraged that we would abandon the Mets so quickly. They went on to accuse us of not being real fans, and finished by saying that our website sucked anyway. Specifically:

If you were True Mets Fans you woudlnt go to the Rays... I dont know what yor doing..

youre obviously not a real fan if you can change teams just like that. good riddance, this site sucks ass anyway

I'm not bothered so much by the vitriol or the shoddy grammar and spelling, but I kind of wonder what goes on in someone's head to make them believe that we were actually shifting the focus of the site like that -- on a dime and a whim. The truth is that we all kind of needed a break from the everyday drudgery of following the Mets as we do and this was our way of enjoying ourselves a bit. I'm glad most folks found it as entertaining as we did.

For the record, I *did* register RaysGeek.com just in case, and we will probably leave the banner up at least until the Mets lose. And for whatever it's worth, the Mets won a game, so we got a laugh and a win and everyone's happy. As for the game, Kim and I went to see Forgetting Sarah Marshall at Free Movie Night so I was only able to catch the last inning or so. I enjoyed the film (Kim thought it was so-so), and the Mets actually winning a ballgame made it a pretty great night.

From watching the highlights and thumbing through the boxscore I get the impression that Johan Santana was just good enough to keep the Mets in the game through his seven innings. He gave up another homerun, but like many of its predecessors this season, this one came with nobody on base. The Mets ran with a skeleton crew lineup, plugging in Fernando Tatis in left, Damion Easley at first and Ramon Castro at catcher, though an easy argument could be made for any of those three being the de facto starter at his respective position. Given the alternatives -- Endy Chavez, Carlos Delgado and Brian Schneider -- I have no problem sending the same lineup out there again on Wednesday night. Much like the RaysGeek thing, I say we go with it until it doesn't work any longer.

Someone with a bogus e-mail and an ip address that I know but will not disclose sent in the following today with the subject line of "you should just stay raysgeek".

the mets win a game and now the site was a joke? what a bunch of bull****, ****in fairweather fan go rot for the yanks. your site blows, do everyone a favor and get rid of it!

Sanitized for the children. Please excuse me while I go rot [sic!] for the yanks!