Share All sharing options for: Aftermath: Game 31 - Mets vs Dodgers

The shine appears to have come off of Nelson Figueroa, who has walked twelve batters to just eight strikeouts over his past three starts, failing to break a 42 game score in any of those outings. Things were looking up after his first two starts of the season, as Figgy posted a 13-to-4 strikeout-to-walk ratio and notched individual game scores of 64 and 68. It was a feel-good story for everyone involved: from the fans, to Figgy's family celebrating in Billy Wagner's luxury box at Shea, to Figgy himself.

Did you think it would last forever? These last few starts have been a window into why Figueroa was out of Major League Baseball for five years. His season ERA is up to 4.81 and the odds are pretty good that it'll keep going up, especially if he continues to allow more than two baserunners every inning. I like him, and I continue to root for him, and I still think he's probably a better option in the starting rotation than Jorge Sosa. One of them is likely to get the boot once Matt Wise is ready to come off the disabled list, something that could happen as soon as Friday. The alternative would be to send Joe Smith back to New Orleans, but, unlike Sosa, Smith actually adds something to the bullpen picture. Sosa seemingly only adds runs to the other team's docket.

The Mets still seem to be in Figueroa's corner, though with every start he continues to detract from his own case. He got a bit unlucky with the Blake DeWitt inside-the-parker last night, but even if Ryan Church immediately recognized that the ball had stayed in the yard DeWitt probably winds up on third. David Wright's throwing error on the subsequent play would have chased DeWitt home anyway, so Church's confusion doesn't absolve Figueroa of that extra run allowed.

Pitching aside, the Mets' offense was pucking fathetic last night. They had baserunners galore, but went something like 2-for-13 with runners in scoring position, with Wright responsible for two of those missed opportunities -- both strikeouts -- including one in the bottom of the eighth. Overall the Mets struck out twelve times, including four times looking (!), which is pretty amazing, I think.

The whole offense looks terrible right now. Church and Brian Schneider are both hitting over .300 and, though batting average isn't the go-to stat it once was, it's at least some indication of how well someone is swinging the bat. The Mets' regulars who weren't with the Nationals last season are hitting .260, .265, .250, .216, .232 and .219. Some of them are drawing walks and getting on base in other ways, but those batting averages are ghastly. Tim McCarver must be rolling over in his grave. 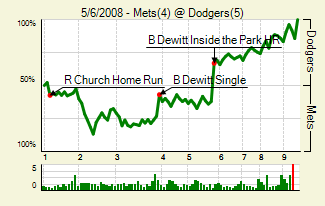