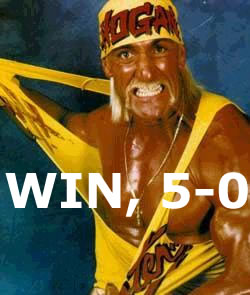 Ahh, three games over .500. The Mets haven't been this far to the good since they were 20-17 on 5/13, and it's nice to see them get a couple of solid victories against the dregs of the National League. Of course, if David Wright doesn't get selected as the last guy on the All Star team then the Giants will actually have more representation at Yankee Stadium next week than the Mets, though I guess that says more about the All Star Game than about either of these teams.

This was a nice win for the Mets, but the game was really pretty boring. I found myself far more engrossed in the mildly off-topic game chatter discussion than in what was actually happening at Shea. All of the Mets' five runs were scored in two innings, and the Giants managed only six baserunners all game and none after the fifth inning. After a short rain delay in the middle of the fifth, the Mets' bullpen combined to retire the final twelve Giants. The Cardinals' bullpen wasn't quite so good, and a Ryan Howard homerun (for real this time) later and the Mets are still 1.5 games back in the East. Doesn't matter, really. The Mets can't busy themselves worrying about what the Phillies, Marlins and Braves do; that's for us to dwell on.

I've spent plenty of time railing against the Mets' offense this year, but the has-beens and never-will-bes came through tonight when middle of the order didn't bother showing up. Wright-Beltran-Easley (?) went 0-for-10 with a couple of walks, while Endy, Delgado, Castro and OurAnus Reyes had eight of the Mets' nine hits and drove in four of the five runs. Though Castro's only problem has been not getting enough playing time while Mr. Six-Extra-Base-Hits-All-Year hits like a girl and we're regaled with anecdotes about how he calls a great game and has a wonderful rapport with the pitching staff. Hippo goes boom is all you need to know.

The guy I'm forgetting is Jose Reyes, who picked up a single to raise his average to .301 and added two more walks to his growing total, bumping his OBP up to .362. He's OPS-ing .846, he's a shortstop, and he just turned 25. That should keep you nice and warm at night.

Thursday matinée tomorrow, so get some sleep before the Mets go for the sweep. 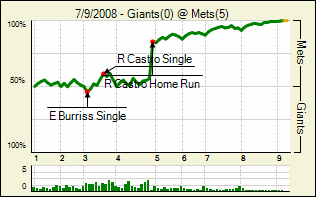 Nice job by JoshNY; his effort in the game thread embiggens us all.