Back In The Saddle

Share All sharing options for: Back In The Saddle 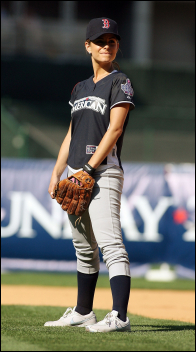 When you've won nine games in nine days, how do you pick up after taking the next three days off? I guess this question applies to everyone but David Wright and Billy Wagner, who technically didn't take the day off on Tuesday but in retrospect probably should have, Wagner in particular.* I think conventional wisdom says that you don't want to interrupt a hot streak. Something about it being so rare that an entire team is playing in the "zone" that you don't want to forcefully bring it to an end before it would have happened naturally. A lot of it seems like mumbo jumbo to me, but I'll grant that players and teams go through periods where they feel really good, confidence is soaring, everyone's locked in, yada yada. I assume most of us have been there at one point or another, whether it was a pickup basketball game or late night Guitar Hero session. We've all had times where we've felt unbeatable at something, and baseball teams and players presumably go through the same thing.

* Quick anecdote: I missed the first seven or so innings of the All Star game. It was Tuesday, and Tuesday is free movie night. Nothing remotely interesting -- that we hadn't already seen, anyway -- was playing at the two closest theaters, so we schlepped out to Wayne to catch Hancock. Interesting premise, great supporting job by Jason Bateman, movie totally fell apart about an hour in. Probably worth a rent if you like superhero movies or Will Smith or both. Anyway, we get in the car to drive home and I flip on XM to check in on the game. 3-2 National League, though moments later Wagner coughed up a game-tying double to Evan Longoria. I remarked something to the effect of, "!@#$. Big stage, big spot and Wagner just can't get it done." To which Kim replied, "Isn't that kinda what he's known for?" I think she knows more than she lets on sometimes.

Well, whatever the case, there's no telling what kind of momentum the Mets will be able to carry through with them to the by-the-schedule second half of the season. Probably little. They open play with four games in Cincinnati, starting with Johan Santana against Johnny Cueto on Thursday. The Reds are a pretty mediocre team with some solid pitching and a few interesting hitters, including Adam Dunn, who'll be a free agent at season's end and should be on the Mets' first-base radar, copious strikeout totals and all. Of course, the Reds are far from terrible, and the early-season (i.e. April thru June) Mets could easily split or drop three-of-four. The new Mets (where have I heard that before?) should be able to win this series, because this time it counts, and even though our season has come I think we all just want to be playing meaningful games come September.

A minor programming note: I'm going to be in Austin (Texas, not Massachusetts) from Saturday through Wednesday. Blackfish is going to help out by posting game threads and I'm going to do my best to generate some regular content, and brief recaps at the very least. If anyone feels like posting something of substance in the FanPosts during that time there's a pretty great chance it'll get promoted to the main page as long as it's at least reasonably cogent and above a third-grade reading level. Interesting FanShots will probably be more likely to be promoted than usual, too, in case FanPosts are too verbose and you're more into the whole brevity thing.

(Note: the pic is of Maria Menounos at the ASG celebrity softball game. All baseball uniforms should fit so well.)