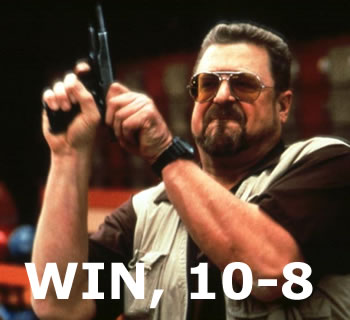 The WPA was fascinating for this game. For starters, check out the rollercoaster graph; I think I puked at turn three. As a refresher, each team starts with a win probability of 50%. This isn't exactly accurate since home teams tend to win more games than road teams, but for the sake of simplicity all games start at 50/50. That means the game is essentially a battle for the other team's 50%. Once a team hits 100% win probability the game is over and that team has won.

Mets' pitchers contributed -60% WPA, which means they blew all of the Mets' starting pot of 50% and then some. That's not a good thing. When your pitching staff digs you into a hole like that you don't usually climb out of it. It's not possible for a team to lose more than 50% of WPA in a game, so when the pitchers lose 60% the hitters have to make up the difference, and in most cases it would be a +10% to the hitters to make an even -50% and a big fat loss. Not tonight, because the Mets' had their hitting shoes on and contributed a mind-boggling +110% WPA, which is enough to win two games and have a little left over for the third. Wow, we all say, but it gets even better. The aforementioned Delgado, Wright and Tatis combined to contribute +125.4% WPA, which means the rest of the offense contributed approximately -15.4%. Throw those three guys out and the rest of the Mets were at -75.4% WPA; keep 'em in the game and it's a Mets victory.

First place, people. How does it taste? 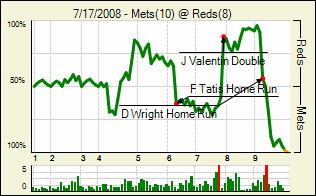