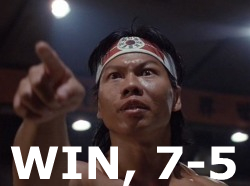 Not Pelfrey's best outing, but the Mets are back in a tie for first place, so woot! Pelfrey got off to a great start and looked completely dominant through the first three innings. Basically every out recorded was either a groundball or a strikeout, which is exactly what he needs to happen to be successful. Things fell apart in the fourth, as Pelfrey starting leaving the ball up in the zone and the Reds' hitters jumped all over him. His fastball didn't have the sharp downward bite that it had earlier in the game, and good hitters will hit a 94-MPH fastball if it's not moving anywhere. Pelfrey ultimately allowed three homeruns -- to Dunn, Phillips and Encarnacion -- after allowing just four homeruns all season. His 9-to-8 groundball-to-flyball ratio was not especially good (for a groundball pitcher), and the more more balls are hit in the air the greater the likelihood of them leaving the park, especially in Cincinnati.

It wasn't all bad for Pelfrey, though. He was extremely economical with his pitches, throwing just 89 in seven innings of work. Even though he didn't have his A+ stuff he did an adequate job keeping the Mets in the game, slogging through those seven innings and giving the Mets a shot at winning the thing. Thanks to Robinson Cancel's leadoff double in the tenth and the mildly inaccurate arm of Edwin Encarnacion the Mets managed a split of the four-game series. The Mets may have been thinking sweep when the series started, but they should be happy to walk away with two victories. They trailed late in both of the games they eventually won, so a bad break or two and this would've been a tough-to-swallow four-game sweep.

And now for everyone's favorite segment, a little something we like to call "Why the !@#$ is Marlon Anderson still on the roster?". Anderson somehow (divine intervention?) went 1-for-3 at the plate, but whatever value that might've added was wiped out manyfold by his spectacularly ass-headed defensive maneuver in the fourth inning. Ken Griffey hit a flyball down the left-field line to lead off the bottom of the fourth inning which Marlon loafed after as if the ball were clearly headed into the stands. Much to Marlon's surprise, the ball landed some fifteen feet fair and Marlon had to pretend he actually gave a crap as it bounded into the stands for a ground-rule double. Is this the best we can do? Kinda reminds me of that scene in Wayne's World 2.

And then Chuck Heston steps in and nails the bit part, bringing Wayne to tears in the process. I realize Marlon Anderson is the 25th man on the roster, but can't we do better than this? Where's our Chuck Heston?

While we're at it, why isn't Ramon Castro playing three days a week, let alone five days a week? Schneider is 33rd in baseball in EqA among catchers with at least 80 plate appearances at .234. That's cherry-picking a bit, as I lowered the bar enough to get Castro and his 93 plate appearances in there. If we bump it up to 150 PA Schneider is at 26th out of 38. That's bad. Not as bad as I thought, actually, but there are still 25 catchers out there that have been better, which is just under one per team. Given 150 PA I'm certain Castro could do better. I'm pretty sure if Castro flipped around and batted lefty he could do better. Robinson Cancel could probably do better. Hell, Raul Casanova is at .253 in 61 plate appearances.

I'm making a plea here: C'mon, Jerry, give your team a fighting chance. Let's make believe for one day that you're *not* a slave to mindless baseball decision-making they way Willie Randolph was. Shock us. Yea, the Mets have won a bunch of games since you took over and they're tied for first place. These are all good things. But when you consistently make choices that put your team at a disadvantage, it just means that the Mets have to do more to overcome the nigh-untenable position you're putting them in. Plainly, they're winning despite you, not because of you. Marlon Anderson hasn't done anything this year to justify significant pinch-hitting appearances, let alone ever starting in a baseball game. Brian Schneider's erstwhile reputation as a plus defender is not a good enough reason to play him in lieu of a clearly superior catcher. Just put the best team you have out there as often as you can and the rest will work itself out. 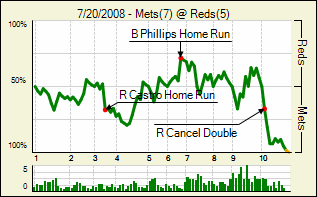