Share All sharing options for: Playin' The Blame Game 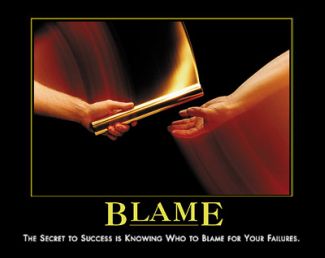 I didn't see any of it. I *did* see The Dark Knight at the Alamo Drafthouse Cinema in Austin, where you can eat and consume adult beverages while watching a moviefilm. So I watched the latest Batman installment (editor's note: it rocked), blissfully unaware of the brilliant catastrophe taking place 1,800 miles away. Even as we left the theater and I pulled up MLB.com mobile on my iPhone I had no idea that the Mets' disappointing 8-6 loss was anything but a typical 2008 New York Mets letdown. I figured Johan Santana had a blah start against the Phillies and the Mets weren't able to put enough runs on the board against Joe Blanton to overcome an early deficit.

Again, I saw none of the game, and the internet connection at the Embassy Suites here isn't really strong enough to support the archived video feed from MLB.tv. Nor, for that matter, is the wireless connection I'm stealing from the Mexican restaurant adjacent to our hotel. With that in mind, what follows is based solely on what I've been able to glean from reading the boxscores and the wire service recaps of the game.

I can probably skip the first eight innings, since nobody really cares what happened before the ninth. The pertinent details of those glorious eight frames can be distilled to the following:

If there's a corollary to those points it's that Billy Wagner was unavailable for the game because he's old, but that's okay because, as I just read on Mets.com, "Manuel [is] confident [that] Sanchez can close". Duaner Sanchez. I kid you not: that article appears on the Mets' homepage, a few links down from last night's recap. From that article by Jon Blau:

"Duaner is a guy who has a tremendous makeup for that particular role," Manuel said. "I have no hesitation about that. His makeup is really off the charts."

*flips to boxscore* Yes, here it is. Duaner Sanchez, in his first taste as closer in absence of Billy Wagner: 0.000 innings pitched, three hits, three runs, three earned, tremendous makeup, zero outs recorded, every batter reached base, off-the-charts makeup. You just can't make this up. Unfortunately, I have no quote from Manual suggesting that Joe Smith and Pedro Feliciano would also make great closers because of their great strength of character, so they have to settle for simply not getting the job done and can only hope that Jerry Manuel's ironic touch can strike them down some other fine day.

I got an e-mail from some dude last night about signing a petition to stop the pitch count, and I guess you can go sign it if you want. Then again, if you're simply dead set on wasting your time you might as well just go pull the internet's finger and at least get a few cheap laughs out of the deal. I can buy the argument that Santana should have been left in to pitch the ninth with a three-run lead and a high-but-not-Livan-Hernandez-high pitch count. Even if you want to give him fifteen pitches -- bumping him up to 120 for the game -- to try to get through the inning, that would have worked for me.

A lot of people are going to pillory Manuel for taking Santana out of the game, and there is plenty of merit to that argument. The other side of the coin is that the burden of responsibility for this loss is on Sanchez, Smith and Feliciano (Sanchez in particular), for allowing six runs while recording just two outs. Randolph Manuel made a questionable bullpen decision and it backfired, but I don't think it was clearly the wrong decision. In retrospect, sure, it looks terrible, but it's not totally unreasonable to expect your bullpen to get three outs before allowing three (or six!) runs to score. Without the data immediately available to corroborate this, I bet that nine times out of ten, a decent non-closer late-innings guy will get the save with a three-run lead in the ninth. It didn't happen this time, and I think that's on Sanchez et al.

This was an awful, awful loss that will linger for a long, long time, or at least until tonight's awesome win/horrible loss, but it wouldn't be baseball if we didn't dwell on the past a bit. I wanna hear in the comments who you think is to blame for this loss and why. If you think it was Manuel's fault, don't just say that it was clearly the wrong decision. I want to know why.