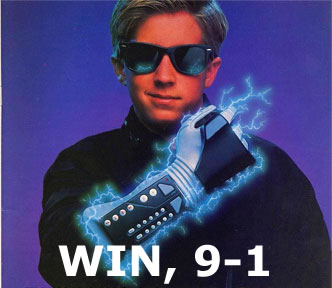 Johan Santana finally gets the complete game he should have had a week ago, and drops his ERA to 2.93, good for sixth in the NL. He thoroughly dominated the Cardinals, a solo homerun by Albert Pujols the only real blemish. I'm told that Duaner Sanchez wasn't even allowed out of the clubhouse until the game was over just to be on the safe side.

The same Mets' offense that was stymied by Kyle Lohse a few weeks ago battered him relentlessly through five-plus innings, cranking out seven runs on eleven hits including three homeruns. The Mets tallied 17 hits overall including seven for extra-bases. Santana went 2-for-2 with a run batted in, everyone in the lineup had at least one hit and either scored or drove in a run.

Carlos Beltran made an in-friggin-credible catch at the wall, but let's see him come up big when it's *not* a blowout, eh? Ramon Castro continues to support my theory that Brian Schneider has incriminating photos of Jerry Manuel or Omar Minaya or perhaps both at the same time. What does this guy have to do to get into more than one game a week? 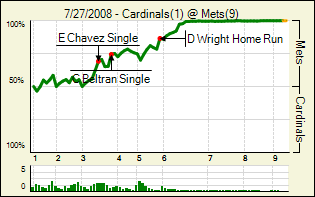