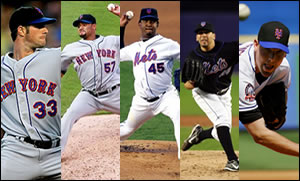 Handsome reader Steve sent me an e-mail yesterday asking why I didn't cover starting pitching in my Mets' needs post. In short, I didn't really think that the Mets' rotation was a big problem. Steve pointed out that the Mets are facing two holes in the rotation next season as Pedro Martinez and Oliver Perez become free agents, and that maybe the Mets should look to shore up one of those spots now.

All of this preceded John Maine's early exit last night due to shoulder stiffness, so either Steve is more prescient than he lets on or he's just an advocate for general preparedness. Either way, regardless of Maine's status I'll take this space to address the Mets' starting pitching situation.

A lot can change in a few months, for better or worse. At the end of April, the Mets had two dependable starters: Johan Santana and John Maine. At the end of July, they have seemingly three dependable starters: Santana, Mike Pelfrey and Oliver Perez. Maine has become undependable because of the rash of mysterious injuries he has incurred over the past couple of weeks. Absent those, he is at least moderately dependable: he'll usually go six-ish innings, though the quality of those innings could vary widely.

Pedro Martinez is still technically on the bereavement list following his father's death, though he is slated to throw an extended bullpen session tomorrow and is slated to start on Friday against the Astros in Houston. There's no telling what the Mets will get from Pedro, though. His game scores since coming back from the disabled list at the beginning of June have gone thusly: 46, 35, 57, 25, 32, 36, 53, 60. That last mark is deceiving, because Pedro left after just four innings with -- wait for it -- shoulder stiffness, just like Maine last night. So Pedro will not have pitched in a game in almost three weeks when he takes the mound on Friday, and any expectations for this start or even the rest of the season are a crapshoot at best.

Santana has been mostly great, and the Mets have nothing to worry about there. Pelfrey has been their next-best starter over the last two months, and he looks to be the real deal. He's bound to hit some bumps in the road one of these days, but his achievements this season stand on their own and I think have given him -- and perhaps more importantly, the Mets -- the confidence that he can be a successful big league pitcher. He turned 24 in January and will be cheap and under the Mets' control for a long time, which is plenty exciting.

Perez was mostly awful for the better part of the first three months of the season, but some combination of Dan Warthen and facial hair have suited Perez well, as he has been dominant over his last four starts. Blip or semi-permanent fix, who's to say, but he's the Mets' number three at this point. As mentioned earlier, he is also a free agent at the end of the season, and there's maybe a 50/50 chance that he returns given that he's very young and is likely to be very expensive as a client of Scott Boras.

So what to do? I don't know that there are too many attractive starting pitchers out there. A.J. Burnett will apparently not be traded, and his teammate Roy Halladay, floated a couple of weeks ago, would cost an arm and a leg and, in terms of tradeable talent, the Mets are squarely in the triple-amputee camp. Roy Oswalt? The Astros are evidently buyers in this market. Would the Reds make Aaron Harang or Bronson Arroyo available? They're both in the middle of long-term contracts, and Harang was awesome as recently as last year. He currently sports a 4.76 ERA despite an impressive 108-to-34 strikeout-to-walk ratio in 123 innings. He turned 30 in May and would be a very attractive option, but there's little reason to believe that the Reds would even make him available.

Things get more interesting *after* the season, when the likes of C. C. Sabathia, Ben Sheets and others hit free agency. The aforementioned Burnett can also opt out of his deal with the Blue Jays this winter, and all indications are that he will do just that. Unless a great deal falls in their lap I expect the Mets to stick with what they've got and hope that Maine's injury woes cease to be and Pedro can return at least to serviceability. There may be some interesting names popping up in August when players have to pass through waivers to be traded, so just because July 31 passes doesn't mean the trading season is over.