Will They Ever Learn?

Share All sharing options for: Will They Ever Learn? 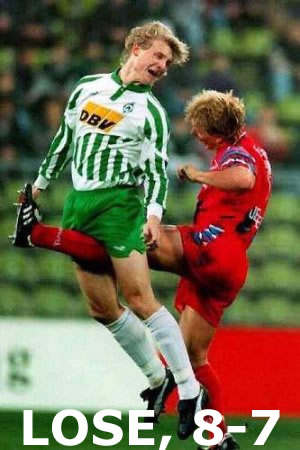 What the hell was that crap about? I don't know why I bother sometimes, because staying up late to watch this team give it up like that as often as they do really takes a lot out of me. This loss was such a wretched, phenomenal failure, but none of us can say that we didn't expect the game to end poorly, at least a little bit. This team seems to be a magnet for suffering, and if there's a reasonable way to lose a game they can usually find it.

Pedro was terrible, then it rained, and then he was much better. Overall, still terrible, but he showed signs of putting things together after giving up four runs in the first. I don't know if he's still tipping his pitches or disguising them well but executing them poorly, but last night's poll still stands as a big question mark for the remainder of the season.

This loss really hurts. The Mets haven't won a single game this season during which they've trailed by more than two runs at any point. Last night they were down by four runs and they charged all the way back to take a two-run lead in the seventh. They'll kick themselves because they had a couple of chances to pad that lead: first in the seventh when Jose Reyes lined out to center to end the inning with two runners on base, and again when David Wright hit a one-out triple in the eighth, only to be stranded when Carlos Beltran struck out looking and Ryan Church grounded out to second. The Beltran-haters will come back out of the woodwork to pillory him for failing to get the runner home from third with less than two outs, but the guy has come through in that situation something like 65% of the time (per the on-screen display SNY flashed right before the whiff).

An extra insurance run or two would have made a big difference, obviously, as Pedro Feliciano promptly gave up the lead in the bottom of the eighth when this fucklick hit a two-run homerun to tie the game. Chris Duncan is generally as bad at hitting southpaws as Brett Myers is good at hitting his wife, and Feliciano has been murder on lefties this season (and in general), but those two facts blatantly disregarded each other and conspired to screw the Mets and left me with no choice but to pathetically cry myself to sleep. Again.

The real hero last night was Jerry Manual, who deftly displayed the same lack of managerial ingenuity that made Willie Randolph the target of much fan ire. With the game tied at seven in the bottom of the ninth, the Cardinals were set to bring up the meat of their order: Pujols, Ankiel and Glaus. Fine, tie game, other team's best hitters coming up, rollercoaster of a game possibly hanging in the balance. What to do? If you're Jerry Manuel, you bring in the worst pitcher in your bullpen and a dude who sauntered around the field before the game wearing a Hello Kitty backpack (that, of course, has nothing to do with his crappiness). Billy Wagner is twiddling his thumbs in the bullpen, and he's the best pitcher you've got, and I don't care that it isn't a save situation or that you might have a save situation next inning or the inning after. If you don't get through their team's best hitters RIGHT NOW then there won't be a game to save later. I've basically accepted the fact that a manager will never bring in his best reliever to pitch to the heart of the order in the seventh or eighth inning, even though it may be the highest leverage inning of the game. It's the right thing to do, but it doesn't happen and it might never happen because closers like to pitch the ninth inning. But this *was* the ninth inning, AND it was the highest leverage situation of the game, and Manual still made the absolute wrong decision and the Mets lost the game because of it. There were other things the Mets screwed up, and even if Muniz (or Wagner) came in to shut down Pujols, Ankiel and Glaus, there's no guarantee that the Mets would have won the game anyway. But you've gotta give them a chance, Jerry. 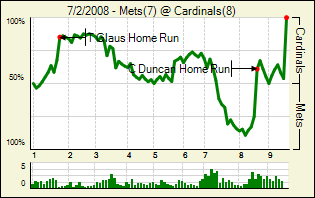 Nice job by JoshNY; his effort in last night's game thread embiggens us all.