Now That's What I'm Talking About

Share All sharing options for: Now That's What I'm Talking About 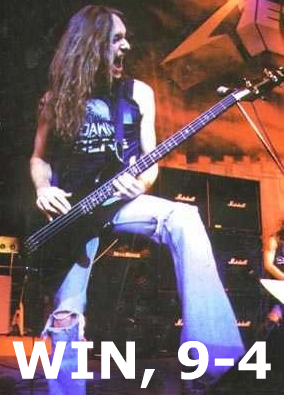 This team, man. I'm out, I'm in, I'm out, I'm in. They almost won on Friday night only to blow it late, just as they almost lost last night only to come on strong at the end and win by five runs. The Mets gave John Maine a three-run lead early on and he gave it back when man-beast Ryan Howard went opposite field in the fourth. The Phillies took the lead in the bottom of the seventh just to see the Mets march back with three apiece in the eighth and ninth to put the game away.

Maine and Ryan Church both left the game due to injury, but it doesn't look like either is serious. Maine had a cramp in his left forearm and was removed for precautionary reasons. Church left with dizziness that was later diagnosed as a migraine. I'd normally be pretty concerned, post-concussion syndrome and all, but Church has had migraine problems since high school so this could very well have nothing to do with the concussion(s). 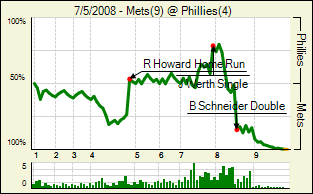 Nice job by pingel; his effort in last night's game thread embiggens us all.