True story: I didn't even realize the rain delay was over until the bottom of the 12th. I wasn't exactly sitting around waiting for it to resume. I had turned off the game and left a browser window open to the ESPN.com boxscore, which is supposed to auto-refresh every thirty seconds or thereabouts. I went about the rest of my day, played a little basketball, took the dogs for a walk, read some, watched the ridiculous Federer/Nadal match. Every so often I would check my computer to see if the game had started up again, and even on a few occasions I forcefully refreshed the page to make sure The Worldwide Leader hadn't conked out. Three or four hours passed like this and I'm thinking to myself, "This has to be the longest rain delay in recorded history". I even remarked to Kim around 8:30 that "This f!@#ing rain delay is going on four hours here." Meanwhile, the game *had* actually resumed and I was missing a helluva ballgame.

The short short version is that the Mets handed Billy Wagner a 2-0 lead, Jayson Werth tied it on a long homerun with two strikes and two outs, and Fernando Tatis won it with a two-run homerun in the twelfth. This is mere hours after Wagner was named as the Mets' lone representative on the All Star team. Aside from Wagner, the Mets' bullpen was splendiferous, pitching four scoreless frames including the last two-plus by Joe Smith.

I guess the sad thing is that the game should never have been close enough for Wagner to below. That's not so much an apology for Wagner as an indictment of the Mets' aversion to timely hitting. The Mets left eight men in scoring position and racked up eleven baserunners in six innings against Kyle Kendrick but managed just one run and basically wasted another terrific *rubs eyes* performance by Oliver Perez. Yea, that's right: Oliver Perez was awesome, again, against another swell offensive team. He added to his league-leading wild pitch total, but only walked two batters in seven innings to go along with four hits and six strikeouts. Maybe he's turned a corner, and maybe Dan Warthen has accomplished in three weeks what Rick Peterson struggled with for two years. I'm not suggesting you carve it into marble just yet, but the early returns are promising especially when you consider that I pilloried the Mets for letting Peterson get away in the first place.

Is this a better win than had Wagner shut the Phillies down in the ninth? Is it a harder loss to swallow from Philly's perspective? Let's also consider that Fernando Tatis is likely to see more playing time on the heels of his late-game heroics, so don't forget to factor that into your decision. Whatever the case, the Mets can do no worse than a split of this series and of the eight-game road trip, which I guess stands as a microcosm of the season as a whole. If the Mets can somehow get anything resembling decent Pedro Martinez on Monday -- and not the dried up husk of Pedro Martinez that we've seen since he came back from the disabled list -- winning this series would be god-damned huge. A win would pull the Mets to within 2.5 games of first; a loss knocks them back to 4.5, right where they began the series. 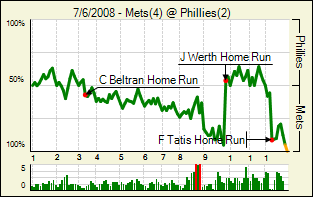 Nice job by JohnPeterson; his effort in Sunday's game thread embiggens us all.