Loves Me Some Rickey

Share All sharing options for: Loves Me Some Rickey

Rickey Henderson and Jim Rice were elected to the baseball Hall of Fame by the BBRAA. Bert Blyleven appeared on 62.7% of the ballots. Tim Raines (21.9%) and Alan Trammell (17.4%) came nowhere near the 75% needed for election; both are eminently qualified and it's an ongoing embarrassment to the BBRAA that neither exceeded even one-third of the support afforded a pedestrian slugger like Andre Dawson (67%). But that's an argument for another day. For now I'd like to spend a few words on Rickey. 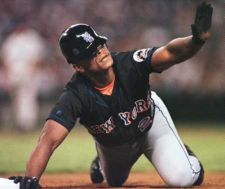 Rickey Henderson was probably my first ever favorite player. I grew up a Mets fan but I always loved those early nineties Oakland A's teams, with hulking mashers like Jose Canseco and Mark McGwire and awesome-at-everythings like Rickey. I remember fawning over Rickey's rookie card at a local trade show. I remember all of the stolen bases and leadoff homeruns. I also remember when the Mets beat out the Orioles and the A's and signed Rickey in December 1998 for one year and $1.8 million. After estimating that he'd be worth $10 million were he still in his prime, Rickey came in with the goods:

"I can still hit if that's what it calls for me to do. But in my game, being a leadoff hitter, hitting doesn't make a difference if you can get on base 40 percent of the time."

In the 1999 playoffs he went 5-for-16 with three walks against the Diamondbacks in the NLDS (.400/.500/.400). Of course, he stunk in the NLCS against the Braves (as did most of the Mets), and there was his (and Bobby Bonilla's) predilection for card-playing that got him into hot water after Game 6.

Rickey mostly stunk for 31 games in 2000 (though he had a .387 on-base percentage despite hitting just .219), and the Mets released him in the middle of may. He unofficially retired three years later at the age of 44 and, while it's not clear that he ever officially retired, he seemed to indicate that he did just that upon accepting the job as Mets first base coach in 2007.

Rickey was one of the greatest to ever play the game, in his own mind and in everyone else's. I will continue to cherish his terrific 1999 season with the Mets (as well as everything else about that season, save the way it ended), and he remains one of my favorite ballplayers, eccentricities and all.