Mets Lose Out On Lowe, Now What?

Share All sharing options for: Mets Lose Out On Lowe, Now What?

So you lost out on Derek Lowe. Your division rival, whom you figured didn't have much money to spend, beat your sorry-ass offer by $28 million. In a soft market you were dealt pocket queens and slow-played them until the other guy made his king pair on the river, leaving you with the shortest of stacks and Oliver !@#$ing Perez. So, what now?

The aforementioned Perez is available. So is Ben Sheets, who has seemingly drawn interest from nobody at all. He has a checkered injury history, but there's little question he is the superior arm:

Let's briefly compare the two in a few areas of interest (see Sam's take on this very topic from last week; I found it worth revisiting considering its renewed relevance): 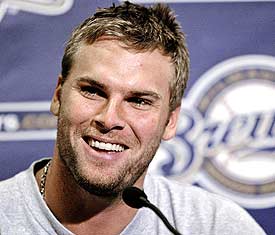 Perez and Sheets were roughly equivalent pitchers in 2007, though Sheets was thrice as valuable as Perez last year. Perez held a 35 innings pitched edge in 2007, which is actually a positive tick mark for each pitcher: Perez gets an edge in health, but Sheets gets a bump in value rate (i.e. the two pitchers had equivalent WAR but Sheets accrued his total value in fewer innings, so given comparable innings we'd expect Sheets to be the more valuable of the two).

Given a typical season from each, I don't think there's any question we could expect Sheets to be the superior pitcher. Perez strikes out more batters (9.25 per nine for his career versus 7.60 for Sheets), but Sheets has vastly better control (1.97 BB/9 versus 4.76 for Sheets), and has a considerably better ratio of one to the other (3.85 K/BB versus 1.95 for Perez).

Perez is three years younger than Sheets (26 versus 29), and may just be entering his prime while Sheets is nearing the back end of his. Perez has 999.1 innings on his arm compared to 1428.0 for Sheets. Sheets has made 77 starts over the past three seasons (31, 24 and 22 including minor league starts) compared to 96 for Perez (34, 30 and 32), so Perez has spent far more time on the field, for better or worse. I think we'd all agree that it's far more reasonable to expect Perez to make 30+ starts in each of the next three years than for Sheets to do the same, given age and health considerations. Whatever their relative values may be, there's something to be said for simply showing up and making your starts, especially when the value of replacement (e.g. Jon Niese, etc.) is likely to be far lower than what is being replaced.

The conventional wisdom is that lefties develop -- or peak -- later in their careers than their right-handed counterparts. I know of at least one study that says otherwise, in which smart guy Rany Jazayerli concludes that "[t]here is simply no compelling evidence that southpaws develop any more slowly than right-handers do." Let's assume, then, that in general lefties don't actually develop later than righties. Certainly, though, specific pitchers develop later than others, and there is one interesting comparable to Perez through this point in his career.

It's not a perfect comp because Perez began his big league career at age 20 while Johnson didn't break in until he was 24. As a result, I had to cherry-pick the cutoff a little bit and ran Johnson's numbers through 1992 (he finished second in the AL Cy Young voting in 1993). Johnson did a much better job limiting homeruns, but in all other respects you can argue that Perez was the better pitcher. These numbers and Johnson's subsequent ascent to legendary status portend nothing of a stunning Perez turnaround, though advocates for Perez's high ceiling would nonetheless be happy to fancy the possibilities. Aside from the homeruns, another stark difference between the two pitchers is fastball velocity, where Johnson regularly sat in the high-nineties and Perez is mired a solid 7-8 MPH beneath that. They both feature(d) devastating sliders, so I suppose Perez can hang his hat on that.

The problem with the Johnson comparison is that for every pitcher who reaches his potential you can cast a stone and peg a couple dozen pitchers who never even came close. The good news for Perez is that he has actually already showed that potential for an extended spell, specifically during his terrific 2004 season with the Pirates (2.98 ERA, 239 strikeouts to 81 walks in 196 innings). That's more than most high-ceiling pitchers can say, but again we run into a velocity problem. Five years ago, Perez's fastball was mid-nineties or better. He's lost five miles per hour over that time, and he has shown no compelling signs with the Mets that he's suddenly going to rediscover that additional oomph. 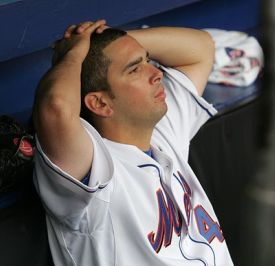 While there's a chance that Oliver Perez will approach his high ceiling, color me skeptical. Nothing I've seen over the last two-plus seasons has screamed "corner turn", and while his relative health is a nice thing to have, there are plenty of guys who will pitch half-decently for 200 innings and won't cost $13 million (see: Redding, Tim). At $7 million or so Perez is probably a good deal, and a worthwhile gamble that he will actually fulfill his potential. If he doesn't, he could still be a decent pitcher for reasonable money. The Mets have reportedly offered him $10 million a year for three years, but they no longer have the leverage they had two days ago and might reasonably expect to spend $13 million a year for four years if they really want to keep Perez around. Perez could be a $13 million pitcher, but he wasn't anywhere near that last year and he probably won't be one next year. He is likely to make 30+ starts and have an ERA in the low fours.

Ben Sheets probably won't cost $52 million over four years like Perez. He might be more like $20 million over two years, which is a reasonable bounty for a terrific pitcher with some health question marks. He could throw 220 innings of 2.50 ERA ball, but he is likely to throw 160 innings of 3.50 ERA ball. That's a heckuva lot better than Perez's likely result and for a bunch less money to boot. Sheets is more likely to miss time due to injury than Perez, but he's also more likely to contribute meaningfully to the starting rotation. His average-case scenario is a good #2 starter; Perez's average-case scenario is a solid #4 starter.

Again, this may all be moot since the Mets haven't shown any particular inclination to reach out to Sheets. One can hope that the Mets sour on Scott Boras's game-playing and opt to go in a different direction, namely Ben Sheets's direction. Or, they could pass on both Sheets and Perez and sign Randy Wolf, but then we'd all have to commit mass seppuku.