Share All sharing options for: The Top 50 Mets Of All Time: #32 Rick Reed

Rick Reed was a struggling journeyman with exactly one solid season on his resume when an opportunity for increased playing time presented itself in the form of the protracted labor dispute that canceled the 1994 World Series and threatened the 1995 season as well. In January of 1995, Major League Baseball approved the use of replacement players for the upcoming season. Reed was one of a group of major leaguers who crossed the picket line and participated in spring training games with the intention of playing in the regular season. He was slated to pitch Opening Day for the Reds when the MLBPA agreed to return to work under the terms of the expired collective bargaining agreement. Reed wound up appearing in just four games with the Reds in 1995, spending the rest of the season with their Triple-A affiliate in Indianapolis.

Reed was granted free agency following the 1995 season and signed a minor league deal with the Mets. During spring training of 1996 Reed quickly learned the penalty for breaking union solidarity when he was banished from team union meetings. Teammate John Franco had no pity for Reed, saying, "He knew what he did, so he has to live with it." For his part, Reed was regretful:

"I decided to do what I did and I had my reasons. But in a way I feel differently now. I don't feel like I'm part of the team. I wouldn't say I've been ignored. But I'm not one of the boys." (source)

Reed spent the entire 1996 season with Triple-A Norfolk, pitching solidly for manager Bobby Valentine. He was given a chance to make the Mets during the spring of 1997 and so impressed Valentine, who was now the manager of the big club, that Reed was named the Mets' fifth starter to begin the season. His addition to the starting rotation was met with mixed feelings from the rest of the team, many of whom still resented his fateful decision two years earlier. It didn't matter to some of them that Reed became a replacement player in part to help his mother pay for insulin; Reed was a scab and would always be one.

Reed went on to have a splendid year in 1997, finishing sixth in the National League with a 2.89 ERA and third in the NL with a 1.04 WHIP. His performance on the field even helped earn him the respect of his teammates. The 88-74 Mets finished above .500 for the first time since 1990 thanks in no small part to "Reeder".

After barely making the team out of spring training the prior year, Reed entered the 1998 season as the Mets' number three starter behind Bobby Jones and Al Leiter, a remarkable turn for a guy who had been a clubhouse pariah just twelve months earlier. Reed turned in another fine year with the Mets, posting an adjusted ERA 21% better than the league and being named to his first All-Star team (he didn't appear in the game, having started just two days earlier in Atlanta). He came within seven outs of a perfect game on June 8 against the Devil Rays and finished the first half with a 2.72 ERA and a WHIP under one. His second half wasn't nearly as impressive, though, as his BABIP ballooned from .258 to .315 and he posted a 4.44 ERA over his final 14 starts. 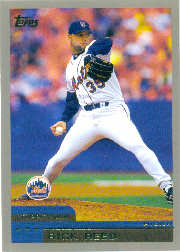 In spring training of 1999 the Mets made a trip to the Dominican Republic to play a two-game exhibition series against the Expos. Apart from baseball, the sojourn meant something more to Reed and his wife, Dee, who came within a legislative technicality of adopting a boy from the town of Santiago eleven years earlier (go read this article for the backstory and this one for the happy reunion).

The Mets had reason to be optimistic heading into the 1999 season, with Mike Piazza back for his first full season in Queens, Rickey Henderson aboard as a free agent, Armando Benitez's power arm solidifying the bullpen, and Reed back to help anchor a rotation that also featured Leiter, Masato Yoshii and one-time Met-killer Orel Hershiser. After allowing one run in six innings for a win in his first start of the season, Reed left his second start when he suffered a strained Achilles tendon heading to second on a would-be double. He spent the next three weeks on the disabled list while the Mets got off to a 17-9 record.

Upon returning, Reed found that he lacked the trademark control that made him one of the league's best starters the prior two seasons. He walked 47 batters in 149.1 innings, a 2.83 BB/9 that more than doubled his marks from 1997 and 1998. His 4.58 ERA and 1.41 WHIP were the worst of his Met career. Reed wasn't alone in his struggles, though, as only two of the Mets' top five starters bested the league average in ERA and none exceeded it by more than five percent. Fortunately for their pitching staff, the Mets' hitters could mash, so much so that they led the Mets to their first postseason appearance since 1998.

In his first ever playoff start, Reed allowed just two runs in six innings to propel the Mets to a 9-2 victory at Shea in the third game of their NLDS series against the Diamondbacks. The Mets won the series the next day on Tank Pratt's walkoff homerun and went on to face the Braves in the NLCS. After dropping the first three games to Atlanta, Reed tossed a gem to keep the Mets alive (it almost wasn't a gem, as Reed allowed two of his three hits as back-to-back homeruns to Brian Jordan and Ryan Klesko to lead off the eighth). Something awesome followed, but then something awful ended it all.

Reed rediscovered his control in 2000, walking just 34 batters in 184 innings for the third-best BB/9 in the league. He missed the first two weeks of July after he fractured his left wrist on an Andruw Jones liner, just another in a long line of non-pitching injuries for Reed. As he put it:

"It's hard to describe. I've tried to bust my butt, work hard, and get prepared for my turn in the rotation. It's been the wrist. It's been the calf. It's been a stiff neck. It's been this and that, little nagging things. I guess this is the icing on the cake." (source) 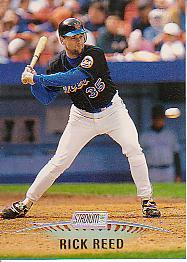 Reed was replaced in the starting rotation by Bobby M. Jones, the clearly inferior of the two Bobby Joneses. Reed returned in time to outpitch Greg Maddux and Randy Johnson1 in a span of three starts. Reed went 4-2 with a 3.29 ERA and 4.30 strikeout-to-walk ratio to finish the season and help the Mets secure the NL Wild Card for the second straight season.

The Mets faced the Giants in the NLDS and, after splitting the first two games in San Francisco (no thanks to Armando Benitez, returned home for the pivotal third game. Reed, the former replacement player2, started the game and allowed just two runs in six innings, striking out six along the way. The game remained tied at two until the bottom of the thirteenth when Benny Agbayani, himself a former replacement player, deposited an Aaron Fultz offering over the left-centerfield wall to give the Mets a 3-2 walkoff victory. The Mets won the NLDS the next day on the greatest postseason pitching performance in franchise history.

The Mets went on to battle the Cardinals in the NLCS but Reed didn't fare so well this time around, coughing up five runs on eight hits in just 3.1 innings as the Mets dropped the series' third game 8-2, allowing St. Louis to pull within 2-1 in the process. The Mets didn't need Reed, though, as Mike Hampton's arm and Mike Piazza's bat led them to a 4-1 series win and the team's first pennant in fourteen years. Unfortunately for Reed and the Mets, the Yankees were awaiting them in the World Series.

After dropping the first two games at Yankee Stadium (thanks again, Armando), Reed kept the Mets alive in game three, allowing two runs on six hits while striking out eight. He left with the game tied at two runs apiece, and the Mets plated two more runs in the eighth against Orlando Hernandez and went on to win 4-2, cutting the Yankees' series lead to 2-1. We all know how that one ended3, so there's no need to rehash the whole thing here.

The 2000 offseason brought Reed his first taste of real free agency. He flirted with the Dodgers for a couple of weeks before eventually re-upping with the Mets for three years and $21.75 million. He got off to a terrific start in 2001, posting a 3.10 ERA and walking just 15 batters in 119 innings to earn his second All-Star selection. Following the break he made just three starts before the Mets dealt him to the Twins straight-up for outfielder Matt Lawton. Reed didn't see it coming:

"I'm a little numb, to be honest with you. What do you do? Life goes on. I enjoyed my time here." (source)

Reed played out his contract with the Twins to mixed results, retiring after an injury-plagued 2003 season. During his time with the Mets he was often referred to as the "Poor Man's Greg Maddux", but Reed did well to evolve from inauspicious beginnings as a struggling replacement player to become one of the better pitchers in the league4. He had to earn the respect of his teammates through hard work and strong performances, and it didn't hurt that he was terrific in four of his five postseason starts with the Mets. Never flashy but always workmanlike, Reed was one of the good guys and just so happened to be a fine pitcher to boot.

1In case you're wondering, Joe McEwing went 2-for-3 with a double and two RsBI against Johnson.
2Former MLBPA chief Marvin Miller did not attend Reed's start, and had some choice words for Reed even five years after he crossed the picket line.
3Poorly, for the Mets.
4During his time with the Mets, Reed had the 12th best ERA in baseball (Martinez, Johnson, Brown, Maddux, Smoltz, Clemens, Schilling, Glavine, Leiter, Mussina, Hampton). His 1.60 BB/9 was second only to Maddux.