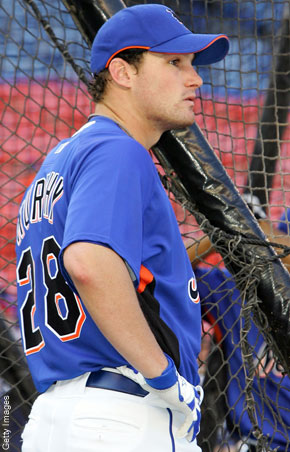 Entering the 2008 season, the Mets and their fans had plenty to worry about, not the least of which was a farm system that had endured an offseason of ridicule and Johan. Daniel Murphy had earned the "prospect" label the season the before, but being in the basement of an already poorly regarded system, he wasn't exactly on a lot of radars. John Sickels ranked him 18th in the Mets farm, with a C grade. Kevin Goldstein ranked him 9th. Goldstein wrote:

The Good: Murphy has the best pitch recognition in the system and advanced hitting skills, with a smooth stroke and nice barrel control leading to a low strikeout rate. He has gap power now, and some projection for more down the road. He brings a grinder's mentality to the park and plays hard.

The Bad: Murphy is neither toolsy nor athletic. He split time between third base and the outfield in college, and his defense at the hot corner is rough--he needs to make considerable improvement in his footwork and throws to avoid getting branded as a first-base/left-field type. His power ceiling is debatable, especially considering the positions at which he can play.

Murphy started the season in AA Binghamton alongside similar no-glove, intriguing bat types, Mike Carp and Nick Evans. Although the latter players got more recognition early on, Murphy improved in nearly every aspect of his game. His pitch recognition translated to higher walk totals, he flashed more power, and even stole fourteen bases. Then, after a trip to the disabled list, Murphy asked to switch to second, perhaps sensing an opportunity to clear his own path to the majors. On August second, that opportunity arrived. Murphy began platooning with Nick Evans in left. Then Murphy hit. And hit. And hit. He finished the season with a .313/.397/.473 line, having successfully hit himself into the Mets' future plans.

Following the regular season, Murphy reported to the AFL, where he raked and, by most accounts, played adequate secondbase. Omar Minaya, however, claims he will share left with Fernando Tatis. Whether or not this platoon makes sense, Murphy posted a .4 UZR (2.6 UZR/150) in LF last year, suggesting he can man the position with average to above-average ability.

Projecting his bat is trickier. His .386 BABIP will certainly regress, but his 33.3 LD% is encouraging. He drew walks more often than his minor-league record would seem to permit, but he also struck out too often. He could hit for high average, but don't be shocked when he floats around .280 for most of the season. Similarly, his power could improve but the 10-15 home run range is very possible. Many praise Murphy's gap power, so maybe he will rack up a ton of doubles in the expansive Citi Field.

All things considered, Murphy seems like a decent enough place holder in left with the potential to be better. Mets fans can and should be excited about his 2009, but it's hardly a sure thing. Minaya hints that Murphy is the firstbaseman of the future and his bat must really show up to justify that label. That being said, don't be surprised if a leftfield signing and a poor early-showing by Delgado or Castillo has Murphy entrenched in the Mets' infield before long.