Citi Field and tHR: An Interview With Derek Carty

Share All sharing options for: Citi Field and tHR: An Interview With Derek Carty 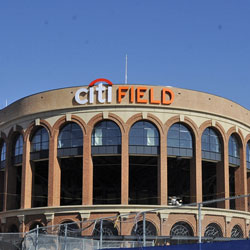 Derek Carty, a Mets fan, writes about fantasy baseball for The Hardball Times. His analysis, which extensively employs sabermetrics, is peerless and a good place to read-up for next season. One important element of his work, isolating skill from luck, lead to him to develop "True Home Runs," a statistic based on Greg Rybarczyk's HitTracker system. I immediately thought of "True Home Runs" when reading Eric's interview with Mr. Rybarczyk and sent Derek a few questions about the stat, the Mets, and Citi Field.

Sam Page: What are "True Home Runs" and where did you get the idea for the statistic? What does your data to date illustrate about the influence of parks, weather, and plain luck on homerun totals?

Derek Carty: True Home Runs is a stat that I created this past season that attempts to identify how many home runs a hitter "should" hit. It's long been known that luck plays a big part in the game of baseball (as few people actually like to admit it), and people like myself are always looking for new ways to isolate the skill from the luck. We can't predict the luck, so stripping it out is the best way to predict the future.

Ever since I started writing about baseball, I've made use of Greg Rybarczyk's HitTracker system. After a while though, I realized that there was more that could be done with such an innovative system. I first wrote about some of my ideas here, and immediately got an e-mail from Greg, who was more than willing to help. After working on it for a while, I finally came up with True Home Runs, which I introduced here.

The numbers everyone sees on the HitTracker site run each hit through the HitTracker engine, but they run each hit in the park it was hit in and don't adjust the weather at all. tHR is different in that it runs each hit in two environments: a park with league average dimensions and weather (as a proxy for away games) and the hitter's home park with average weather for that park. This helps to neutralize the luck involved with the circumstances a home run is hit in. After running these, I weigh each equally since a hitter should generally be expected to play an equal number of games home and away.

Another guy who Mets fan should be familiar with is Hanley Ramirez, whose power jumped this season. He hit 33 HRs, but tHR saw him as a 21 HR hitter with a HR/FB in line with his career numbers up until this point. Look out for a decrease in 2009.

SP: As part of your "Smoke and Mirrors" series at the Hardball Times Fantasy Focus, you cited tHR in claiming Carlos Delgado's 2008 power was a fluke and headed for a major regression in 2009. What other Mets were lucky or unlucky in 2008? Do these numbers give us any insight into how they might hit in Citi Field?

DC: We need to keep in mind that the article you cite dealt with Delgado's tHR numbers for Shea Stadium as my copy of HitTracker doesn't have Citi Field in there yet. Using these numbers, it looks like Jose Reyes was the unluckiest on the Mets team as tHR saw him as a 19 HR hitter. It's seen him as a 20 HR hitter for all three years we have data for, and 2007 looked particularly unlucky (and we saw somewhat of a bounce back in 2008).

Brian Schneider appeared to get pretty lucky as he hit several of his homers very shallow to right field near the foul ball, over the shallowest part of the fence in most parks. True Home Runs also thinks Fernando Tatis overperformed, though it thinks he would be much better suited to a league neutral park as opposed to Shea. David Wright, Carlos Beltran, and Ryan Church were all pretty neutral.

SP: You also mentioned at the Hardball Times that you were concerned about Jose Reyes' homerun power because of the specific location of the the Citi Field fence. Greg Rybarczyk mentioned in his interview with Eric that Jose might enjoy having a deep RCF for triples and possible inside-the-park homeruns. From a non-fantasy perspective, do you see Citi net-helping or net-hurting Jose? What other players might be particularly suited or ill-suited for Citi's dimensions?

DC: Well, assuming that the wind doesn't play differently (which, as Greg noted in the original article, it very well could - although it should be noted that from 2002 to 2006, Shea's average wind speed was just 0.7 MPH), the guys who hit their home runs to right field figure to be hurt the most by Citi Field. This is particularly bad news for Jose Reyes. He doesn't destroy many balls, and he hits these balls almost exactly where the fence will be moved back most dramatically. I could see a fall-off to 10 or 12 home runs with a lot bouncing off that wall or being caught on the warning track. That might be a little extreme, but certainly not out of the question. I would be happy with 15 HRs out of Jose.

Even though his 2B and 3B totals could increase, honestly, I see this change as a net negative for Reyes. A home run is definitely more valuable than a double or a triple, so even if all of his would-be home runs turn into a double or triple, he's still losing productivity. Unless he could manage to turn a bunch of would be outs or singles into doubles or triples – which might not be too terribly likely since the fence will be backward – he's going to lose some value.

Ryan Church's power is very, very similar to Reyes's (as far as where they are hit), so I'd expect a similar impact on him. Given a full-season of at-bats, though, he could still maybe muster up 15 HRs or possibly approach 20.

Carlos Delgado's power should have been expected to decrease in Shea, and now that the right field fence is being moved back, it could decrease even further. A fall-off to 20 HRs wouldn't really surprise me at all, and he surely won't be legging out any triples. The Mets need to trade him quickly with his value at it's peak.

One guy who could be helped is Brian Schneider. As I noted earlier, he hit several home runs to the extreme right field corner, which will actually be moved in. This is still a small target to expect him to hit consistently, and his other home runs should all die on the warning track unless he's playing on the road, though.

David Wright will be affected less than the rest of the because most of his homers go to left field. Beltran hits to all fields, so the impact on him will probably be somewhere between Reyes and Wright.

SP: If you were the GM, would you really trade Delgado in this market? Who's on first?

DC: It depends. If I'm the GM, I'm doing a lot more work and putting a lot more thought into it than I can as a writer. I also have more resources, and I'm able to talk with all the other GMs and feel them out. That said, if I can trade Delgado for a nice return, it's something I'm going to do. It would leave a hole at first, but I might try and get creative and swing a three-team deal or make a side deal for a first baseman. We're on the cusp of finally winning big, so I wouldn't have a problem with trading a couple of prospects in the right situation. Someone that immediately comes to mind is Joe Koshansky of the Rockies. He's got big-time power and a good glove, plus takes some walks. The Royals have a glut of 1B guys, so I might see what they'd want for someone like Ka'aihue or Shealy.

I'm not sure how the Rockies would feel about it, but I might even offer Pelfrey, the return we get elsewhere for Delgado, and a prospect like Bobby Parnell for Koshansky and Ian Stewart. Again, I have no idea if the Rockies would consider that reasonable or if it's just wishful thinking on my part, but I think it would fill in first base and second base nicely for years to come. It would, of course, create yet another hole in the rotation, and Koshansky isn't exactly a sure thing.

In regard to Delgado, I'd be talking with teams like the Angels, Nationals, and Giants and seeing what I could get. A good, young-ish pitcher would be nice, and I'd be perfectly okay with packaging Niese or maybe even Fernando Martinez with Delgado for someone really good. Heck, I'd consider both with Delgado for a guy like Ervin Santana.

SP: Greg predicted a Santana Cy Young in 2009. Many stats, however, indicate his 2008 was lucky. What's your prediction?

DC: Well, I'm not quite as down on Santana as some statistically-inclined people. Those who are down on him, I think, are looking at things a bit too simplistically. Sure, his stats should have increased moving to the National League this year. No doubt about it. He had a down year. I don't believe it was that lucky, though.

One thing we need to remember about Santana is that, even though his peripherals dipped, Santana is one of the few pitchers in baseball who has shown the ability to control his BABIP and LOB% over a long period of time (although his LOB% in 2008 was too high even for his standards). Even if his peripheral ERA is 3.50 or something like that, his abilities outside of the big-three peripherals (K, BB, GB) that we ignore for most pitchers (because we assume they're league average) would push it down to 3.00. Santana is not like most pitchers and doesn't follow the same rules. That's not to say he doesn't follow any rules, they simply need to be adjusted.

I also though I'd not that a new stats I'm working on called CAPS (Context Adjusted Pitching Statistics) says Santana's K/9 should have been 8.1 this year, better than his actual K/9 of 7.9. Plus, there should be some natural regression coming since we can't treat 2008 as Johan Santana's absolute talent level. I don't know if Santana will be the best pitcher in the NL this year, but with just a little luck I could definitely see him winning a Cy Young. I'd watch out for Dan Haren and Javier Vazquez, though. They would be my sleeper picks, outside of obvious candidates like Brandon Webb and Jake Peavy.