JC Romero Is A Dirty Cheater (Who Cares?)

Share All sharing options for: JC Romero Is A Dirty Cheater (Who Cares?)

Whatever. Philadelphia reliever JC Romero was suspended for 50 games for "negligence", which so far as I can recall is not one of the banned substances agreed upon in the current collective bargaining agreement. Actually, the name of the substance Romero was found guilty of using has not been released, and there is plenty of confusion about its legality and who was actually aware of it.

The MLBPA sent the following letter to its constituents on 11/21:

The article linked above is a tad disjointed, so here is a timeline of the events in question. 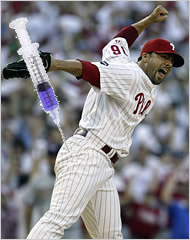 It seems if anyone should be held for negligence it's the MLBPA, which clearly provided questionable guidance to its players with respect to these three supplements. One would think, given the penalties being handed out, that the MLBPA would urge its players to err on the side of caution and avoid anything even remotely suspicious. No poppy seed bagels, no hemp clothing, nothing.

If it's any consolation, even if you can argue that Romero should have been in the clear this time around, I'm just going to assume that he has used PEDs at some point because I categorically assume that of every ballplayer. The reality is that from a probability standpoint, it'll be an accurate assumption some 90% of the time (I'm guessing). One important question resounds: Does it even matter? It has become patently obvious even to the piously ignorant that PED use has been rampant in baseball for at least twenty years and probably more like forty (or more), and that most every ballplayer has succumbed to the temptation of greatness or fortune or both and downed some greenies or plunged Winstrol into his ass (and possibly his teammate's ass, too).

If five percent of ballplayers used performance enhancers then we could rightly defame them as an immoral minority. We know that isn't the case, though. Juicing has been the rule, not the exception to it, and since there were no edicts until recently that prohibited their use let alone enforcement of same, I'm ready to turn the page and move on. The dark cloud of drug use means nothing to me anymore because it hangs over everyone, with few exceptions. I will judge this era's ballplayers to be on equal footing, which means Mark McGwire, Barry Bonds, Roger Clemens et all will be evaluated as ballplayers on their merits alone; their relative values as human beings irrespective of drug use is another story entirely.

Apologies for the tangent.