Share All sharing options for: Citi Field: Where Home Runs Go To Die

Citi Field opens for real in three months, but I feel like we still know very little about it aside from its aesthetics. Dimensionally, we know it'll sport a similar configuration to Shea Stadium, with some variably higher walls and the odd geometric nuance to break from straight symmetry. Ted Berg took a crack at predicting the field's playability following a December press tour of the facility, and his best guess was basically the same as mine.

As it happens, I was thumbing through my Hardball Times Annual 2009 on Monday and took to reading an article by Greg Rybarczyk of Hit Tracker, the primary gist of which was to recap the 2008 season with respect to the homeruns that were hit. Tucked away at the tail end of the article was a bit about Citi Field, which I'll excerpt below:

Citi Field, the new ballpark for the New York Mets, is poised to become MLB's new Grand Canyon. City Field is a vast, cool weather, sea-level stadium, and those factors will have a hugely negative impact on home runs.

Johan Santana and the rest of the Mets pitching staff will like the new park, but the Mets' front office should sign their power hitters now, before the word gets out. In spring 2009, baseball fans are going to get a live demonstration of what happens when a team sets out to design a pitcher's park, and overdoes it.

This came as news to me, so I shot Greg an email to see what was up. What follows is our exchange, which I think provides a strong basis for what we can expect out of Citi Field this season. 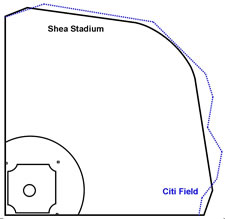 Eric Simon: For starters, what makes Citi Field a "Grand Canyon" where Shea Stadium was merely a decent pitcher's park? The park dimensions are nearly identical, with Shea actually slightly deeper in many cases.

Greg Rybarczyk: I'm sure most people have not had access to the drawn-to-scale Citi Field prints, as I have, but when you compare the dimensions you get there for Citi Field with the ones for Shea Stadium that you get from overhead satellite photos, you will see that Citi Field is actually deeper in almost every part of the park, and by a large amount. You will see that only in the corners is Shea deeper, and then only barely so in LF and a bit more so in RF, while Citi Field is a) hugely deeper in RF and RCF, and b) somewhat deeper with much taller fences in LF and LCF.

By the way, I've had other people point out to me that Shea is marked as 410 to center field, and CF is stated to be coming in at 408, so why do I show CF deeper? Because the overhead satellite photos show Shea's fence in straightaway center to be, in reality, about 408 feet from home plate, and the Citi Field prints show the corresponding dimension to be about 410 feet. If they build Citi Field to their prints (which they seem to be doing quite precisely as far as I can tell), then what I show in my diagram will be accurate. I made my diagram by making an exact tracing of the print.

Really, Citi Field is not even close to Shea dimension-wise, and home runs will be drastically reduced. I predict this because over the last three years, my analysis of every home run hit in MLB revealed that approximately 29% of all home runs have cleared the fence by 10 feet or less. At least half of the Citi Field outfield fence is either 10 or more feet deeper, or effectively 10 or more feet deeper due to a combination of longer distance and higher fence height.

Now, there could be some change in the wind patterns that makes Citi Field more favorable than Shea, as Shea was open in center field and frequently had wind coming in, while CF is more sheltered. We'll have to see how that turns out, but I haven't seen any convincing evidence that the wind will be more or less favorable in CF than it was in Shea. A few people have stated what the wind was doing on a particular day in November when they got inside Citi Field, in the particular spot they were standing in, but that's not much to hang one's hat on.

ES: What would account for the discrepancy in advertised versus actual Shea dimensions? Do similar disparities exist throughout the league? I gather that Mets ownership was hoping to build a stadium that played like Shea, though perhaps slightly more favorable to pitchers. Do you suspect that they were aware of the Shea dimensional disparity before designing Citi Field as they have, or do you think they've merely underestimated the effect these changes will have on homeruns?

GR: One thing about "published" dimensions: I don't think there is any accepted standard of where exactly you ought to measure to to come up with your "RF" number, or your "RCF" number, etc. So it is quite possible to use very different numbers and still technically both could be right. You also see (on older parks) changes in fence or home plate position that can make a number change (or an actual dimension change without the number on the fence padding being changed.) You also see some numbers that are just downright wrong, like the 434 sign in deep LCF at Dolphins Stadium (which should say 427 or so). Who knows why they leave that the way it is. Also, there was a story written a couple years back about RFK Stadium being mis-marked, which happened as a result of some wall pads being switched inadvertently.

I don't suspect that anyone is deliberately misleading anyone about the dimensions at Citi Field; I think it is more likely that they set out to design a pitcher's park, and they didn't ever get a truly accurate reading of the Shea Stadium dimensions (which is understandable since it is a smoothly curved fence for the most part), and if/when they realized they were deeper than Shea, they probably thought a few feet of distance, or a few feet of wall height, was no big deal. I guarantee that no one could have told you what percentage of homers clear the fence by 10 feet or less before I came along, and therefore everyone would underestimate the significance of being 5-10 feet deeper in most of the field.

ES: You're absolutely right about that. I would probably have guessed that an extra ten feet in outfield wall depth would decrease homerun output by 5% or 10%. If we assume that Citi Field suppressed homeruns as much as you predict it will, how long before the Mets move the walls in to compensate, if ever? Finally, given all of this, what kind of odds would you give Johan Santana to win the Cy Young award in 2009?

GR: Well, it took the Tigers five years to reconfigure Comerica Park after they built that enormous field, but they had some obvious options - originally their bullpens were in a "cutout" in RF, so it was easy to move them to LF and fill in with seats. I'm not sure I see great options like that for Citi Field - if they fill in the "well" in RF, they lose their RF overhang, which I think is one of the signature design elements of the park. Maybe they could add a few rows in LF and bring the fence height there down at the same time - this would be my vote for most likely change to swing the pendulum back towards neutral. I hope they do that instead of a field level picnic area like they did in Miller Park in RF, and in U.S. Cellular Field in RF.

I think the odds of Johan winning the Cy Young are pretty good, actually. Of course he's got to pitch well, but the field is going to help him and help the relievers that try to keep his inherited runners from scoring, and the relievers who try to close out the game in the 9th. Since the Mets have a great CF in Beltran, they will never be worse than even with an opponent in terms of covering the huge outfield, so there's another plus for the Mets. I think scoring may not necessarily be that much lower, also, due to the certain increase in triples, and most likely in other non-homer hits as well due to the bigger field. Homers will be way down, but I see Jose Reyes liking the deep RCF alley, he will certainly rack up some triples and maybe some ITP homers as well.

To see more of Greg's work and learn about how he measures homerun data, head on over to Hit Tracker.