David Lennon penned a pretty straightforward article the other day titled "Could Matsui and Mets be a match?" about the soon to be free-agent outfielder. Lennon notes three circumstances that might make Hideki a good fit for the Mets: 1. He wants to stay in New York, 2. He wants to play the field again, after a year as a DH, and 3. The Mets have a need for a leftfielder and a power hitter. The most telling part of the article, however, was a typically vague quote from the ubiquitous unnamed team-official:

When asked if Matsui can play the outfield again, the official said, "I don't see why not."

After spending an entire season as a DH, nursing two bad knees, Matsui's ability to reacclimate to the outfield is debatable. His track record of poor fielding, however, is evident. Over nearly 5,500 career innings in the outfield, Matsui has averaged a -16 UZR/150. In his last season of 900+ innings in the field, 2007, he posted a -7.6 UZR in 112 games. Going forward, Matsui figures to be at least 10 runs below average over a full season.

Offensively, Godzilla has a .367 wOBA in his American career. After a career worst .348 wOBA in an injury-shortened 2008, he rebounded this season with a .378 wOBA, due in large part to a career-high 17.4% HR/FB. Like other left-handed hitters on the Yankees, Matsui seems to have enjoyed hitting to the short rightfield porch in the New Yankee Stadium: 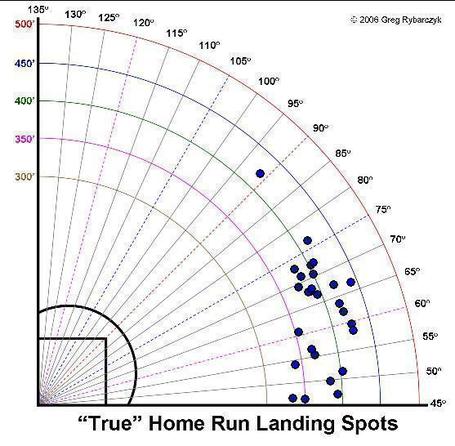 Even without the homefield advantage, career high power numbers are not the kind of thing you expect a player to replicate at age 36.

Assuming a .360 wOBA and -15 runs in the field, Matsui would be in the neighborhood of a 2 WAR player. That's a market value of ~$9MM, a four-mil pay cut from his Yankee salary. A 2-WAR leftfielder would be serviceable, but probably available elsewhere for much cheaper. Ultimately, Matsui seems out of line with both the Mets stated priorities this offseason, get younger and minimize injury risk, and their needs, better defense and increased production from non-premium positions. Matsui is also better suited for an AL team that can make him a part-time DH to rest his knees.