Share All sharing options for: Jenrry Mejia In Pitchf/x

Thanks to the Gameday cameras operated by MLB during the Arizona Fall League, we now have statistical measurement of the mythical stuff of Mets top prospect, Jenrry Mejia. Based on conflicting scouting reports, Mejia's plus-fastball sits anywhere in the 93-97 mph range, while his changeup and curveball both lag behind to varying degrees in terms of development. Last night's data is just a small sample, from an admittedly poor showing, but a good first step and evaluating his repertoire.

Well, the great velocity is real. His fastball does have some sink, as advertised--not a sinker by any means, but somewhere in between that and a straight fastball. Ditto his changeup to a lesser extent. His curveball showed above-average vertical movement, which is perhaps the most encouraging thing to come from last night's showing. Still, he only threw four, one for a strike, so I wouldn't read too much either way into that, other than he's perhaps not totally comfortable with the pitch yet.

Due to the extreme variance of movement on his pitches, though, the averages don't really tell the whole story. 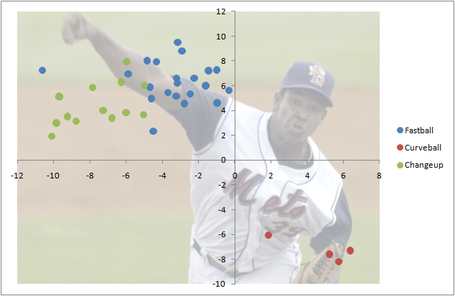 His fastballs and changeups were all over the place in terms of horizontal movement, which probably explains why he kept missing badly outside the zone. Some of said pitches, though, clearly had the nasty sink most of us were hoping to see. 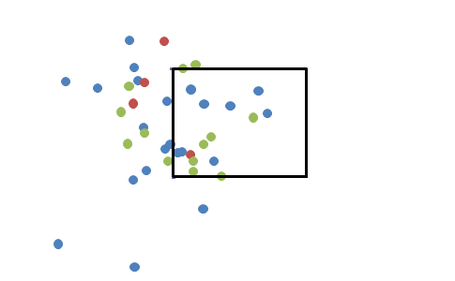 In the future, it will be important for him to come inside to lefties, which he seemed unable to do yesterday.

Still, don't read too much into yesterday's performance, as it was just five batters, three of whom were lefties. He did have a poor walk rate in AA (11.50%), but still managed to pitch pretty well there at just age 19. Jenrry has the rest of the fall and probably all of next season in the minors to improve his control. The main take-away is that he flashed a 97-mph sinker and a curveball with more downward movement than Clayton Kershaw's.