This'll be a quick one. We don't actually know yet whether Citi Field will generally suppress homeruns, runs, hits, or inflate any or all of those things. Eighty-one games isn't enough to make any long-term assertions with any significant degree of certainty. Coming into the season we thought it might be death to homeruns, and to be sure there weren't a lot of homeruns hit there in its first season. The problem with just taking the total number of homeruns hit -- 130 -- and concluding that the park is no friend to power hitters is that it tells us little about how the park played relative to other parks. Of course, the paucity of Citi Field longballs has a lot to do with the fact that the Mets played there, and the 2009 Mets, as we well know, were a bad baseball team which was especially bad at hitting for power.

Rumor has it that Matt Holliday has already expressed interest in playing in New York, either for the Mets or the Yankees. No big surprise, as the New York teams can offer the biggest spotlight and, in most cases, the biggest paycheck. He also has some trepidation about playing -- really, hitting -- in Citi Field, which is understandable given how much the media seems to have hammered home the points that Citi Field hates homeruns and that the dimensions should be altered accordingly. So for Holliday -- and anyone else repelled by the dimensions of the Mets' home park -- I whipped up this simple chart to illustrate, at least as far as we know right now, that Citi Field is clearly not harder to hit homeruns out of than the average park. On the contrary: Citi Field was 12th in 2009 homerun park factor at 1.057 (i.e. 5.7% more homeruns were hit in Mets games at Citi Field than on the road).

There are plenty of good reasons not to sign with the Mets, but their home ballpark shouldn't be one of them. 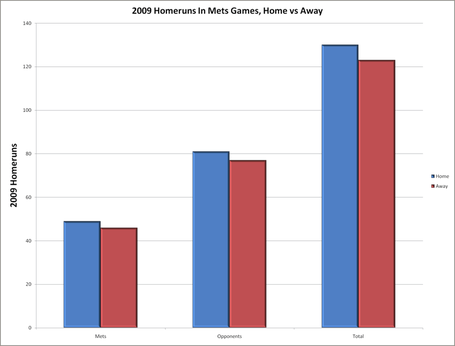