Recently at the Post, Joel Sherman threw some water on the John Lackey dreams of many Mets fans, instead proposing a series of buy-low candidates the Mets would be prudent to acquire. His criteria reads:

So if the obvious avenues are blocked, where do the Mets go? I am going to recommend three starters that have this in common: They are AL flyball pitchers with high-end stuff, coming off bad years (all had 5.00-plus ERAs).

He is overstating the effect of switching leagues by totally ignoring qualified National League pitchers, but is definitely considering some qualities the Mets should pay more attention to. Did his search yield anyone worth acquiring?

Sherman's first suggestion is Jeremy Guthrie. He starts with a pretty convincing case against Guthrie:

Guthrie is coming off, by far, his worst season (10-17, 5.04 ERA), and his strikeout rate fell for a fourth straight year, never a good sign.

His strikeout rate didn't just decline, it went from barely average to bad: 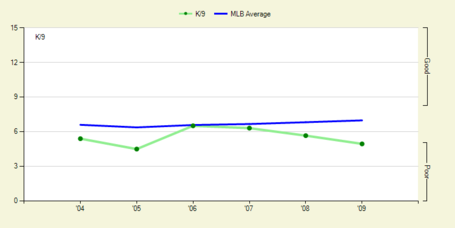 But Yankee hitters continued to praise his stuff.

That's a basically meaningless statement, since you wouldn't expect the Yankees to trash their opponents publicly. The assumption there, however, that a drop in "stuff" hasn't led to the drop in strikeout rate, is supported by Pitchf/x finding virtually no change in his pitches' movement. As for his extreme flyball tendencies, Sherman conflates some trends, and ignores most of his career numbers.

He yielded the most homers in a season in the AL since 2006 (35). Fewer than half (17) came at home, but he was the second most extreme flyball pitcher among qualified AL starters in 2009.

Guthrie, the third most extreme flyball pitcher among qualified AL starters in 2009, posted a 10.9% HR/FB, which is actually exactly equal to his career mark. In fact, the huge number of homeruns was the result of Guthrie going from a career extreme groundball pitcher to flyball pitcher suddenly. As a result, his homeruns allowed should only be expected to come down if you think he will revert back to a groundball pitcher suddenly, which is much less likely than simply regressing from some bad luck. While this expectation may be a decent gamble in itself, best-case Jeremy Guthrie is a groundball pitcher with averageish stuff, which is basically the opposite of what Sherman was trying to find. That being considered, Ruben Tejada and Bobby Parnell, Sherman's proposed package, is a horrible trade for a pitcher who is best case Pelfrey-lite and worst case, useless.

For his second proposal, Sherman does something odd, pointing out how team-abuse led to Gil Meche injuring his arm, then quotes the organization that abused him to prove Meche would be alright:

But he was doing bullpen sessions late in the year and two Royals officials told me that if the team was in contention, he would have been able to pitch.

Was it the same Royals official who said Meche's injury came from having the wrong "mindset"? Meche did have some bad luck with homeruns, the difference between bad 5.40 tRA and a not-good-at-all regressed 5.04 tRA*. There's precedent, however: throughout most of Meche's mostly forgettable Seattle career he posted similar HR/FB numbers. Bottom line: why trade for and subsequently pay $24MM dollars for two years of a huge injury risk, with higher-upside, cheaper, injury risks on the free agent market? Busted Gil Meche for two years or Rich Harden for one? Sherman fittingly proposes trading Castillo, because the Royals need fielding help, Sherman and Dayton Moore being the last two people on Earth who believe Luis Castillo plays anything better than horrible defense.

His third idea, Ervin Santana, is like Gil Meche in that he did have some bad luck with homers last year, but has the larger red flag of arm issues and a big contract. Unlike Meche, however, Santana is a year removed from a great 6 WAR season and could be worth the risk. For that same reason, though, he'd likely cost more in trade.

Not being one to criticize without contributing, however, I'll add three buy-low pitchers, who don't necessarily conform to Sherman's criteria (much like his own three).

1. Felipe Paulino- Paulino went 3-11 with a 6.27 ERA, which likely makes Astros GM Ed Wade's eyes bleed. Underneath those superficial stats, however, Paulino had very good peripherals and an absurd HR/FB rate, making his tRA* an above-average 4.42. He's got blazing stuff, a very unfavorable home ballpark, and his value couldn't be lower. Trading for Paulino seems like a total no-brainer.

2. Sergio Mitre- I think Mitre fits Sherman's rubric for a trade target better than any of his three. Mitre demonstrated middling stuff with improved control, but somehow gave up 10 homeruns in just 51 ML innings. With an ERA of 6.79, and an xFIP of 4.19, Mitre may be worth the rare cross-town trade.