In his most recent mailbag, Marty Noble suggested the Mets sign free agent outfielder Mike Cameron.  This a smart proposal for a variety of reasons.  Cameron has long been one of the most underrated players in baseball (his career worth is on par with some low-level Hall of Famers) and even at 36 years old he is still a well above average performer.

At the plate, Cameron is most known for his power and strikeouts.  He can be counted on for 20-25 homers, a .200 Iso and 150 strikeouts a year.  He can also draw a walk and a .340 wOBA seems like a fair projection for 2010.  Considering he is one of the best defensive outfielders in the game, Cameron's bat is more than adequate.  Based on UZR and +/-, it appears he's about a +5 defensive center fielder.  Fangraphs WAR had him as a 4 win player in 2008 and 4.3 in 2009.  Being conservative let's say he's a 3-3.5 win player going forward.  He made $10 million in 2009, but given his age and the free agent market, a 1 year deal at about $8 million might be sufficient.  This would, in all likelihood, be a steal of a contract.  One other positive - he is almost universally praised for his clubhouse presence.

Cameron vs. Carlos Beltran defensively is a toss-up but I'd probably give the slight edge to Cameron right now.  Given Beltran's injury concerns, it would be best to move him to left field if Cameron signed.  An outfield of Cameron-Beltran-Pagan would bring a smile to the faces of Met pitchers, as all 3 are adequate center fielders.  This alignment resembles the Franklin Gutierrez-Endy Chavez-Ichiro triumvirate employed by the Mariners earlier this season.  It would be prudent to find strong defensive outfielders to take advantage of Citi Field's dimensions.

Matt Holliday would be a welcome sight in Flushing next season but recent talk of his potential contract is a bit troubling.  A cheaper, short-term outfield solution might be a better move, and would allow for improvements in the rotation and 1st base.  Cameron returning to the Mets seems unlikely, but hopefully the memory of his last game as a Met in 2005 wouldn't stop him from signing. 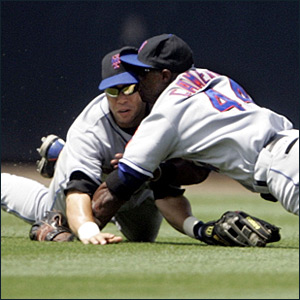