No Choice At All: Holliday>Lackey

Share All sharing options for: No Choice At All: Holliday>Lackey

Yesterday, Jon Heyman "tweeted" that the Mets wouldn't be pushing hard for John Lackey. I was happy to hear this news, but puzzled when I read on metsblog that 69% of their readers would prefer Lackey to Matt Holliday, assuming a choice between the two. For those of you wanting Lackey, hopefully I can try and account for this gap in fan perception and persuade you otherwise. Remember, Mets fans (who participate in those metsblog polls), you have been wrong before: 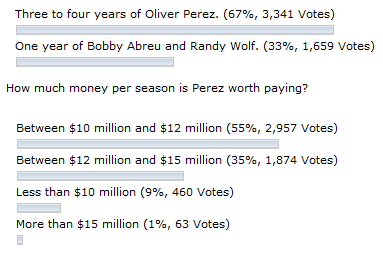 The case for John Lackey: In 2009, the Mets had one of the worst rotations in baseball. While injuries decimated the team, the rotation was clearly flawed by design, doomed from the start. John Maine was hardly a sure thing, having not thrown off a mound until the spring. And whether you realized it at the time or not, Oliver Perez, the reigning walk leader, was probably the most overrated starting pitcher in baseball and doomed to be average at best. Sure, he pitched well in 2007, but his ERA was just as much a product of the Mets great outfield defense as it was his comeback (FIP of 4.35). Next season, his walk rate regressed closer to his career mark, his strikeout rate dipped, and his fastball velocity lost a tick. In fact, his 2008 season more closely resembled his (3-13 6.55 ERA) 2006 season than his breakout 2007.  Don't believe me?

In fact, the only thing Perez did better in 2008 compared to '06 was throw called strikes, the least important indicator. So what was the difference between 3-13 6.55 and 10-7 4.22? He gave up significantly fewer homeruns in 2008, despite an identical FB%, largely a product of luck. He also had a .288 BABIP, compared to .336 in 2008, which implicates (among other things) a better defense behind him. The better W/L record is entirely a product of playing on the Mets versus the Pirates.

Did I just spend all that time rehashing why people were wrong about Perez to rub it in? No, I understand why Perez was attractive at the time: relatively young, durable, and with good stuff. I bought an Oliver Perez jersey in 2007. The Perez situation, however, demonstrates some key lessons applicable to why I don't want the Mets to spend on Lackey, instead of Holliday. That is NOT to say John Lackey, a very good pitcher, is comparable to Oliver Perez, a very poor pitcher.

Instead, Oliver Perez neatly illustrates why nearly all free agent pitchers get overrated. Most fans have a hard time differentiating a pitcher's performance from his team's fielding. The Earned Run Average statistic has much to do with this; ERA measures how a team's defense performs when a given pitcher is on the mound. Defense includes fielding and pitching. Statistics like tRA and FIP that try and differentiate between these two performances aren't perfect, but are empirically pretty accurate. The conclusion here is not that John Lackey is overrated by his defense, but that he would have posted a worse ERA for the horrible-fielding 2009 Mets than he did on the above-average 2009 Angels.

As an illustration, take the most common argument for John Lackey: "The Mets need a good #2 starting pitcher to complement Johan Santana." Totally reasonable, but has no one asked why this sentiment didn't exist last year, when the Mets had the exact same personnel? Could it be because most fans hoped that Mike Pelfrey with his 3.72 ERA, lower than John Lackey's 2008 and 2007 ERAs, could that solid #2?

In 2009, Pelfrey pitched almost exactly the same as he did in 2008. He even flashed a better slider. His strikeout rate improved. His walk rate went up a little, but he threw a fewer percentage of balls. The main difference? He allowed more homeruns and more hits, basically the anti-2008 Oliver Perez. The Mets infield defense was horrible, and I've beat this dead horse thoroughly by now. Without Reyes, and with an under-performing David Wright and increasingly bad Luis Castillo, Pelfrey's ERA went up because the defense on days he pitched was worse, not him. If Pelfrey had a 3.72 ERA this season, would you vote differently on Holliday/Lackey?

Secondly, Oliver Perez demonstrates that pitchers too often get paid for what they did, not what they're likely to do. Many people, including myself and Matt Cerrone believe Omar Minaya only thinks about what was wrong with last year's team, not what could go wrong next year, when constructing a roster. It's a valid criticism, but is little good, unless we identify high-risk players and situations. Pitchers, in general, are less likely to repeat feats of durability or performances from years before, both because of the injury-risks associated with pitching and the aforementioned factors outside of their control. John Lackey, who gets described with terms like "bulldog" and "workhorse," has come off two straight seasons where he has missed time with conditions such as "elbow strain" and "arm strain."  He'll be 32 next year, and while he still pitches very well, he has experienced a yearly drop in swinging strikes since 2005, a potential sign of declining stuff.

Instead of potentially risking another franchise crippling contract, why not pursue Erik Bedard, Rich Harden, and Ben Sheets on a year-to-year basis? All three of those pitchers have poor track records of health, but undeniable stuff. Harden-Bedard combined could reasonably be estimated to provide the same results as Lackey. More importantly, however, with a better fielding, the Mets have some pitchers in-house who might also provide similar results to Lackey.

The case for Matt Holliday: Matt Holliday would go a long way towards helping the Mets defense. He gets a bad rap because of his below-average hands and poor arm, the most notable traits to the average onlooker. These traits are also the least important, however, as a fielder's range most greatly influences the number of hits, and in turn runs, his pitcher allows. According to Ultimate Zone Rating, throughout his career, Holliday's arm has been 15.8 runs below average, his errors have cost virtually no runs compared to the average leftfielder, but his range has been 48 runs above average. The Mets already have Jeff Francoeur's cannon manning rightfield. They could most use a rangy leftfielder to complement Beltran in Citi Field's huge outfield. For another source, check out John Dewan's +/- rank of the best left fielders in 2009: 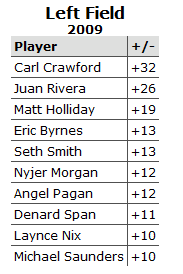 Offensively, Holliday is elite. Much ado was made about Holliday's home/road splits and how the related to Coors before this season, but Holliday still hit very well, albeit with expectedly fewer homeruns. If anyone still cites his home/road splits, read this:

He hit fewer homeruns and linedrives, but still walked a ton and hit for high-average. He's a great hitter, even if he is not the insane hitter he was before. Another argument I've heard against Holliday is that he only started hitting when he got to St. Louis, and that his numbers are the product of one hot streak. This point makes little sense to me, because:

That leaves "AL is harder than NL" which is both overblown and irrelevant if he'll be signing with the Mets.

Conclusion: John Lackey is a very good pitcher and may very well be worth whatever contract he receives. Matt Holliday, however, is younger, carries significantly less injury risk, and helps the entire pitching staff with his fielding. Pitching performances like John Lackey's last year are replicated by plenty of surprising and unexpected players every season (think Joel Piniero). A long-term investment in Matt Holliday solves a gaping hole the Mets have endured in their lineup and fielding alignment for years now.