Inside Out: Daniel Murphy's New Approach To Fastballs

Share All sharing options for: Inside Out: Daniel Murphy's New Approach To Fastballs

Daniel Murphy's 2009 season began well enough, with a two-run homerun versus Cincinnati on opening day. By June, however, Murphy had already endured the worst of a month-long slump, with his OPS dropping below .700. With the rash of injuries to the opening day roster, no amount of poor hitting could cost Murphy his starting first base job. With plenty of time and uncharacteristic amount of patience, Mets fans waited for the rookie to fulfill their unreasonable expectations and rebound. And he did - sort of. Known for his keen batting eye but sub-par power, he hit an inexplicable .294/.320/.513 from July 24th to the end of the season, after hitting .241/.308/.352 prior, raising his season line to .266/.313/.427. This turn-around was a triumph for the many Mets fans who both saw Murphy as the first baseman of the future, and don't know how to evaluate offense beyond batting average and RBIs. Very often his precipitous second-half drop in walk-rate is left out of any discussion.

Still the walk rate bothered me, and probably a few others, so after digging around in his month-by-month plate discipline data at Fangraphs a pretty clear pattern emerged: 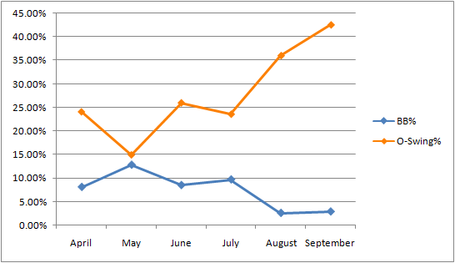 He was swinging at pitches outside the zone at a rate not even Omir Santos or Jeff Francoeur knew. So was Murphy making really good contact with a bunch of pitches outside the strikezone, essentially trading OBP for SLG? His batted ball profile didn't really reveal a direct rise in linedrives: 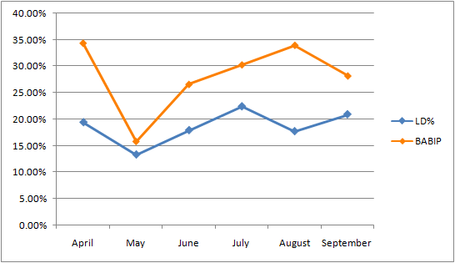 While BABIP is not directly related to LD%, the number of line drives a player hits is a big factor, which is why many people like the LD%+.120 formula as a quick and easy BABIP estimator. If anything, it seems Murphy was getting a little unlucky during his cold streak (~.150 BABIP vs. ~.250 xBABIP in May) and a little lucky in his hot streak (.340 BABIP vs. ~.300 xBABIP), neither of which are surprising. I'm wary of looking at BABIP in such small sample sizes, as it can violently fluctuate, but the relative increase is obviously not as dramatic as the steep drop in BB%. Was Murph's newfound swing-at-everything approach an overreaction to an unlucky first half? Or were they unrelated?

The conventional wisdom as to why Murphy seemed to play two seasons was an adjustment versus fastballs:

Earlier this season, pitchers were exploiting Murphy’s wide stance by pounding him inside with fastballs. He and the hitting coach Howard Johnson were aware of it, but Murphy continued to struggle, batting .176 in May and .240 in June. Only recently have those adjustments started to feel natural, and since Aug. 15 Murphy is batting .306 with 15 runs batted in.

One way to measure the effectiveness of a hitter against a particular pitch is linear weighted run values. Dave Allen penned a good explanation here:

The run value of any event is the change in the expected number of runs scored over the rest of the inning from before and after the event happened.

Against fastballs, Murphy was -8.3 runs on the year, or -0.65 runs on average (negative is bad). Using pitchf/x data, I divided that number between the aforementioned intervals of time (beginning to July 24th, July 24th to the end of the season). The two "seasons" split nicely, with the first half measuring in at -7 and the second half at -1.3. On its face, that seems like an obvious improvement.

When measuring the values as rvaaE, run values based on what he did (line drive, fly ball), not the outcome (out, single), the numbers told a different tale. According to rvaaE, Murphy was positive 3.8 during the first half of the season and -1.4 during the second half. This data supports the theory that Murph's new approach may have been an overreaction to a small sample size of bad luck.

To investigate further, I "sliced" the area in and outside of the strikezone into eleven slices, as Harry Pavlidis demonstrated in this BtB post. Here's Harry's division of the horizontal space:

The middle "fat" area of the plate is 8-inches with all the others being four inches. The two zones I added to Harry's original model are everything outside of the two farthest zones in the above graph. Starting from the "fat" and moving outward, the four zones on each side are "Side," the completely over the plate; "Edge," which includes one inch of the plate; "Off"; "Wide"; and "Wild." The designation of "In" and "Out" is added to determine which side and is based on the handedness of the batter. So, in Murphy's case, being lefty, the positive values, or the boxes to the right, are inside.

First, we can compare the number of swings Murphy sent through each zone during each period of time: 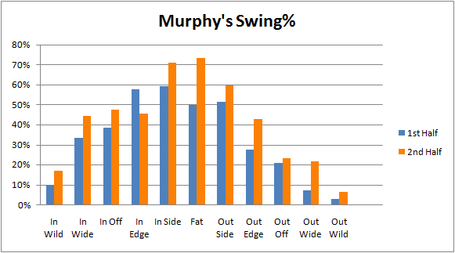 The good news: Murphy swung at more fastballs over the plate, represented by "Fat" and "In Side" (aka "inside"). The bad: he swung at more fastballs nearly everywhere else, too, including those more than a foot off the plate. The odd: the only zone in which he swung less often in the second half was the inner edge, which includes the last inch of the plate and three inches off the plate, and was supposedly his problem area earlier in the season. Considering that foul balls and swinging strikes count as swings, though, here's a complementary chart showing the percentage of pitches he actually put in play: 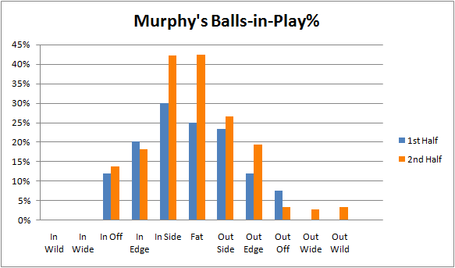 On the pitches that ran most inside to him, he never put a ball in play all season, which make sense when you consider it included balls as far as three feet inside (behind him). That, in large part, explains the drop in walk rate. He swung at considerably more of those pitches in the second half, at both edges of the batter's box. Refocusing on the aforementioned "In Edge" slice, we see that the percentage of balls he put in play was closer, suggesting he may have been better at picking which fastballs to swing at, while not necessarily swinging at all of them. To better see how he put the balls in play, this next graph compares run values per pitch in each slice: 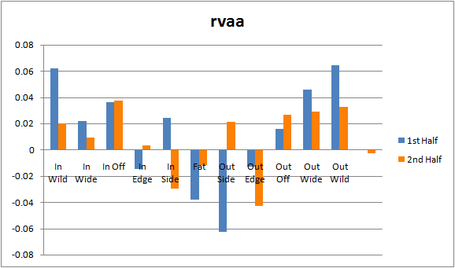 The most obvious disparities are on pitches farthest off the plate, where the free swinger approach obviously costs runs where walks are to be had. The slices "in off" and "in edge" demonstrate an improvement on hitting fastballs thrown inside and slightly off the plate, which resulted in the tangible improvements that prompted this whole article. The two biggest disparities, at the "in side" and "out side" slices have a lot to do with homeruns, which is a good warning about how certain outcomes can skew these small sample sizes. Those disparities are partly neutralized by the rvaaE, which treat many homeruns as normal flyballs: 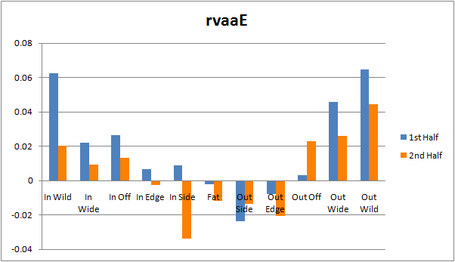 Here, the aforementioned split between total rvaa and rvaaE for Murphy's season is reflected on every inside-pitch slice. Whereas in the previous graphic, Murphy showed better results on pitches inside and slightly off the plate, this data suggests he actually hit worse. That's not necessarily true, granted, as batted ball data isn't always precise and not all flyballs are equal, as I suggested above when it gave HRs slightly negative run values.

The discrepancy does, however, raise an important issue with Murphy's new approach, which is: what if he faces bad luck on balls in play next year, or at least worse luck than he did down the stretch in '09? The situation would be similar to Jeff Francoeur's worst seasons, in which his low BABIP dragged his entire slash line down. I am not claiming that Murphy just got lucky in the second half of this season, far from it, he did show improvement on inside fastballs. The problem is that the approach he demonstrated in those months does not set him up well for future success. Murphy should swing at fastballs over the inside and middle of the plate, but at the cost of swinging at nearly everything else, it's probably not worth it. Hopefully next year he can use his natural batting eye to find a balance, in which stays patient on outside and even borderline pitches, while making high levels of contact on pitches in the zone.

Big thanks to Harry Pavlidis, of cubsfx and Beyond the Boxscore fame for providing the pitchf/x data! All other stats from Fangraphs.