Share All sharing options for: Five Numbers To Avoid When Evaluating Starting Pitchers

They are: 1, 2, 3, 4, and 5. Invariably, with the offseason, people start making their fantasy teams, which contain a lineup and a 1-5 starting rotation. During the long winter, these teams find themselves posted all over the internet, usually looking something like this:

.....explode oliver perez in2 the sun

The Mets certainly need pitching help for next season. According to fangraphs, the pitching staff finished 27th in the majors, one of just 6 with a cumulative WAR lower than Albert Pujols alone. My concern here, however, is how we talk about starting pitchers, not a specific solution. The standard 1-5 ranking makes sense, because the 5-man rotation is the centerpiece of all modern pitching staffs. Discussing specific pitchers, or the construction of a rotation, with this 1-5 rubric, however, holds the discussion back.

First, labeling a pitcher a number is vague and virtually meaningless. Numerous times this season, I suffered through a discussion that began along the lines of "I really thought Pelfrey was going to be a solid number two this season, but now I can see he's just a four, or a three at best." What can we surmise from this assessment? That Pelfrey got worse? That he didn't meet someone's vague expectations? It doesn't describe how he's an average pitcher with decent control who needs to throw his slider more often and is heavily dependent on his defense for game management. It certainly does not talk about how with better up-the-middle infield defense, and a pitching coach that kept him down in the zone, he could put up some pretty nice numbers; or that he has been 4.8 WAR in the past two years. In some ways, this way of talking about a rotation is even worse than talking about wins and losses, since at least wins gives you a general, but very imprecise, sense of where a pitcher stands relative to the league. Besides, what does being a #2 mean when your competition is this group: 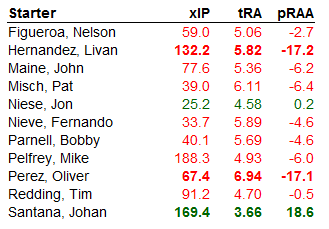 Especially in the offseason, the point of accessing a pitcher's value is so that you can compare him to other potential rotation candidates. How deep can a comparison be when everyone is 1-5? We don't compare hitters this way; Albert Pujols is a 3rd-spot hitter, but so is Jose Lopez on his respective team. The inevitable solution is a bunch of equally vague qualifiers like, "Solid 3" or "4 on a good team," which only muddle the picture further.

More importantly, however, the 1-5 ranking is the very framework that has failed the Mets so often. Rotations don't actually go 1-5. Look at the graphic above, which shows eleven pitchers started for the Mets this season, all with varying numbers of innings pitched. For a fanbase that has been so quick to bemoan the lack of depth and forward thinking from the Mets,  penciling-in 4. John Maine 5. Jon Niese seems a tinge hypocritical. By putting them down as "the four" and "the five" you are implicitly expecting that they will pitch the fourth and fifth most innings next year and give the fourth and fifth best performances. Anyone who expects John Maine or Jon Niese a lock for over 100 innings next year is nuts. Many fans wrote down 2. Pelfrey and 3. Perez last season and were perfectly happy to do so at the time.

So, when you talk about pitchers, talk about what they contribute to this team, not where they slot in. Also mention any concerns going forward, and the plan if those concerns become real problems.