The season is over and the witless rumors are already afoot. As we brace ourselves to be inundated with similar baseless piffle in the coming weeks and months, the best defense against rampant speculation is, well, rampant speculation, but at least an effort can be made to be somewhat realistic in our rampancy. Having said that, we'd like to announce the 2009 Amazin' Avenue Offseason Plan contest, where you guys get the opportunity to don your general manager caps and dream up a plan to fix the Mets.

Here's how it works: we're going to set a deadline by which all entries must be submitted via FanPost. We will select the best of the bunch (three, five, it depends on how many good entries we receive), and then we'll present those finalists to the community for a vote. We will be periodically bumping some of the best plans to the front page. As for the rules and guidelines, they are as follows.

The winner will receive, courtesy of Uncommon Goods, a small slab of rusty metal. Actually, it's a piece of steel from Shea Stadium, framed in plexiglass and suitable for display on your desk, wall, shelf, mantel, nightstand, casket, or anywhere really. You can read more about the item or buy one for yourself or someone else at Uncommon Goods. 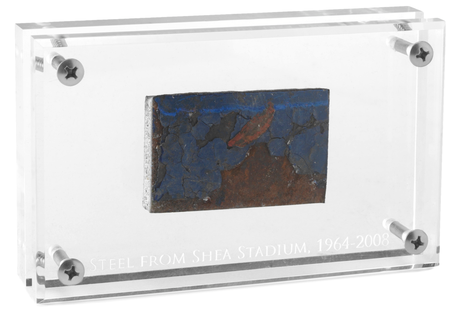 That's it. You can start posting now. Good luck.