Is Orlando Hudson The Answer At Secondbase?

Share All sharing options for: Is Orlando Hudson The Answer At Secondbase?

Some things never change: the Mets are supposedly eager to move Luis Castillo to make room for free-agent Orlando Hudson. I agree with the urge to trade Castillo, but is Orlando Hudson much of an improvement? More importantly, is that improvement worth its cost? Last season, the Dodgers signed Hudson to a 1-year deal with a $3.4 million base salary, although he made nearly $8 million through incentives. According to Fangraphs, Hudson was worth $13MM (2.9 WAR) in 2009. If the Mets want to get Hudson, they'll almost assuredly not get that kind of bargain. I honestly have no idea what he might command, but ironically the Castillo contract will probably be a good starting point for Hudson's agent.

Offensively, Hudson projects better than Castillo. His .342 wOBA last season was right in-line with his career totals to that point. Like Castillo, he hits an absurd amount of groundballs, but isn't dependent on infield hits to generate offensive value, because of a decent amount of power. For that reason, his offensive game is much less likely to deteriorate in the coming seasons. Still, it's important not to overstate the difference in their hitting contributions in 2009--0.3 WAR, or 3.3 runs.

Hudson's biggest perceived advantage over Castillo is fielding ability, which is true, just not in the way most people think. According to UZR, Hudson was -3.3 runs below average, while Castillo was -10.4 runs below average in significantly less playing time. So, Hudson would be a big upgrade, but only in the sense that no one could possibly worse than Castillo out there. I think the divide in perception vs. reality of Hudson's defense comes not just from him being sure-handed and not rangy, but from being rangy to one side. O-Dog has always been much more proficient at going to his glove-hand side (toward firstbase) than to his left for groundballs. So he will make great diving catches, just in one direction. If the Mets plan to go with Murphy at first in 2010, some of Hudson's defensive value might be negated by the far-right side of the infield already being covered by Murphy. Actually, John Dewan's plus/minus system (which is calculated much in the same way as the popular UZR) breaks each infielder's performance by how they hand balls to their left, dead on, and right. To illustrate my point I applied this data to the STATS fielding chart (plus/minus uses BIS), comparing a Hudson/Murphy infield to a Castillo/Murphy infield. There are a lot of disclaimers attached to this graph, foremost that I just eyeballed this using MS Paint, and also all the standard uncertainty associated with using just one season of data. Anyway: 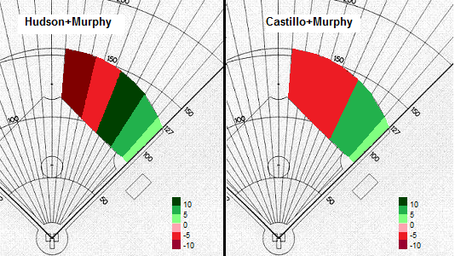 What these charts attempt to illustrate is how overlap with Murphy may mean that Hudson shores up the firstbase-side of the infield but leaves an even bigger hole near second. This probably all means nothing, but James Loney, a decent firstbaseman in his own right, rated worse at getting to balls at his right in 2008 v. 2009.

Plus/Minus, though, actually rated Hudson as +8 (~6 UZR), compared to Castillo, -11 (~-8) in 2009. The system had Hudson as -1 on groundballs and +9 on flyballs (which might suit Johan's IFFB tendencies). Ultimately, I think Hudson would be a big defensive upgrade, but maybe not the savior Mike Pelfrey's been looking for, or any better than average.

Another big concern with Hudson is durability. He has only played 150 games once in his career, although had he not been benched for Ronnie Belliard last year it would be twice. His injury problems aren't chronic like Castillo's, so they are less worrisome going forward, but the Mets better have a good backup plan if they intend to sign Hudson. I would not be reassured by Hudson+Cora.

Ultimately, I have no easy answer regarding Hudson. If signing Hudson is the condition under which Castillo gets removed from the lineup, so be it, I'd much rather have him than Castillo. I worry, however, that the Mets will overrate his durability and fielding and lock themselves into another bad contract. They'd be better served looking into the trade market or signing a real defensive stud, like Placido Polanco or Adam Kennedy, to a one-year deal.