A brief introduction: I am John K., brother of smug know-it-all Amazin' Avenue writer James K. I don't comment often, or ever, due to my academic responsibilities but I read a lot of what goes on here and figured I'd chime in with my offseason plan. I was born a month before the Mets won in 1986 and have been a fan ever since. My favorite Mets are Mike Piazza, Keith Hernandez and Endy "Earthworm Jim" Chavez. I loathe Jorge Posada, Chase "Greaseball" Utley, Chipper Jones and Shane Victorino's Rectum Face.

Here are my position players:

Zaun figures prominently in a lot of the offseason plans I've read here and it seems like he's pretty durable. Plus he used steroids and therefore has proven to me he'll do anything to help the team win.

It was between Adam LaRoche and Nick Johnson for first base but I went with LaRoche because he's less of a broken leg risk. A 1 year deal would be preferable, which is a theme of this entire plan. I'm not big on long-term entanglements.

Luis Castillo has to go. I actually don't hate the guy but he's pricey and seems like a good bet to fall off a figurative cliff next season. When he dropped that pop-up against the Yankees, I was in a bar cheering heartily for the Mets and against that jerk Posada. It was a merry atmosphere for myself and my company until the end of the game. It ruined my night, much like Keith Hernandez's error ruined Kramer and Newman's Shea Stadium experience back in 1987. Trade Castillo for anything. Again, I don't know much about Polanco but he just won a Gold Glove and apparently deserved it.

Cameron is the man. He hits homers, he's awesome in the field and everyone seems to like his personality. Obviously Beltran might not be too happy about moving to left field but I have a solution: offer Adam Wainwright $1 million to let Beltran kick him in the nuts once a season for the remainder of his career. This should be incentive enough for Beltran to be open to changing positions. Whatever Cameron signs for, add that $1 million for the total cost. He's old so a 1 year contract is ideal.

Pagan always seemed to hit awesome when I attended games this year and he's clearly better than Francoeur. Dude should at least be in a platoon role with the French One.

Eric says he wants some graphs so here's one explaining how an outfield featuring Cameron would benefit the team: 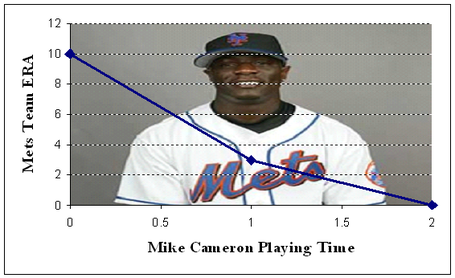 Murphy is not a major league starter, Valdez is sweet in the field and Hinske hits bombs. Home runs are terrific. Here is my starting rotation:

I want strikeouts. I don't want guys that rely on their defense. So I went to the leaderboards and Harden strikes out a ton of guys. Bedard does too. Mr. Bedard is apparently a massive injury risk and Mr. Harden too, but I'd rather pay them less money on short term deals than give John Lackey a crap-ton of years and dollars. I remember Lackey in the 2002 World Series - he was a stick back then. He apparently can't lay off the In ‘n Out Burger in California and has blown up like the Stay Puft Marshmallow Man. He's not quite in Bengie Molina territory but it's rapidly approaching. Of the Maine/Perez/Niese group, I only want to see 2 of them on the Opening Day roster. Let them compete like the pieces of meat they are.

The first 4 relievers are holdovers from the current roster. Self-explanatory. Like Zaun, I've seen Calero's name bantered about in various offseason plans and he too strikes out a ton of guys. Good man. Howry is a jerk for striking out D-Wright in that Sept. 2008 game but his name sticks out, probably because James was talking about trying to sign him last offseason.

Other players the Mets should sign to minor league deals: Marlon Anderson, Rocco Baldelli (awesome nickname, the "Woonsocket Rocket"), Austin Kearns (threw me a ball one time at Nationals Park, good guy), and Will Ohman. And maybe Edgardo Alfonzo can be coaxed back to the team.

To sum my plan up:

I didn't include salaries but I didn't push for Matt Holliday or one of the other guys who would cost a ton of dough so I'm going to assume this is feasible. It's certainly sub-$150 million. I also won't pretend to be a WAR expert so if someone wants to they can tally that up for me. There it is, let the flaming begin.