Share All sharing options for: Where Chone Figgins Fits

The Mets apparently at least feigned interest in Chone Figgins at the GM meetings, but were concerned were he'd "fit" on the team. While that most likely means Castillo is blocking him at second, it's questionable whether Figgins, a third baseman, fits on the Mets at all. He carries the reputation of being "versatile," a label most often given to Mark DeRosa type players who have considerable experience at multiple positions, but hit too well to be bench players. Also, like DeRosa, Chone Figgins seems to be pretty bad at most of those positions:

Often, when discussing versatility, experience gets overrated and skills underrated, because experience is more tangible. After a certain amount of time at a given position, a player can learn how to not embarrass himself, even if he doesn't have the range or the arm to play the position. DeRosa is the classic example. On the defensive spectrum from hardest to easiest to play: C->SS->2B->CF->3B->RF->LF->1B, DeRosa is good at RF and LF, and bad at SS, 2B, 3B, with no experience at C or CF. That's not to say he isn't versatile, there are certainly players who can't play the infield as passably as him, but if you asked most fans who's more versatile defensively: Mark DeRosa or Jose Reyes, they'd probably say DeRosa. If you put the two in either CF, SS, 2B, or 3B, though, I'd bet Reyes would outperform him easily, despite DeRosa's experience.

So when many look at Chone Figgins' fielding stats, they see a bunch of negative numbers and assume a similar situation, perhaps deservedly so. Specifically, there's concern whether Figgins will be a defensive improvement at second, where Castillo's biggest failing has been fielding. However, I'm optimistic that he would be a good defensive second baseman.

First, it's important to remember that you need about three years of UZR data before making a predictive claim about a players fielding performance. His per 150 game numbers for LF, RF, and SS are extremely low, but are the products of maybe 20 starts extrapolated to 150, making them basically meaningless. Just ignore those. The two positions where we have truly significant amounts of data on Figgins, CF and 3B, he's performed averagely and very well, respectively. Weighting his most recent performance and his infield performance more, his +16.7 2009 at 3B is certainly encouraging. Also, for what its worth, the two areas he struggled in playing 2B were errors and doubleplays, according to UZR, both of which are more easily learned than range or instincts. Given that I just encouraged you to disregard meaningless sample sizes, though, slicing the data even more like that is probably bad. In short, I think a +40 defender at 3B this season, according to Dewan's +/-, has a shot to be at least average at 2B, especially when the data doesn't conclusively say otherwise.

That's not to say I necessarily want the Mets to sign him. Offensively he sprays a ton of linedrives and has great plate discipline, hence the high OBPs. He doesn't have much power (career ISO<.100), but at his best is like a super-Luis Castillo. His total production offensively has been pretty streaky year-to-year, 2009 and 2007 were great, 2008 was bad, but his walk-rate has steadily increased throughout: 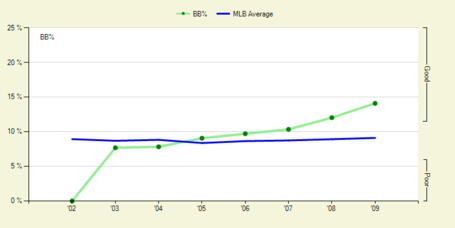 I actually agree with ol' Jerry Manuel on this one, Citi Field might suit Chone. The spacious outfields could help buoy his BABIP, and in turn his overall value.

In leftfield, Figgins is way too risky. One season removed from a .319 wOBA, with a questionable defensive track record, Figgins, the leftfielder, sounds like Daniel Murphy II. Speed doesn't necessarily mean range; if the Mets want range, they should just sign Mike Cameron. Some users have suggested moving Wright to first and Figgins playing third. While that'd probably optimal defensively, the franchise's all-time greatest position player isn't going to be asked to defer, especially when he's a perfectly fine third baseman himself.

Signing Figgins as a second baseman all depends on the price. He won't be a 6-WAR player next year at 2B, but could still be worth $10MM per, on a short term deal. Looking at BPro's baserunning statistics, Figgins' speed projects to be worth about +0.5 WAR. Using his namesake projection system for offense, and a really rough regression of his 2B UZR, that all adds up to ~3 WAR, a $12-$15 value. I'd hesitate to give another long-term contract to a "speed guy" on the wrong side of 30. Looking at comparable players on Baseball-Reference, 3 of the top 5 were retired by age 30. I don't know what that means, but surely nothing good.

Other considerations that make me secretly root for the Mets signing Figgins include: he's a fun player to watch, he has a really cool name, his ability to backup Wright, he has Utley Cove power, and most importantly, considerable grission: