Would Fernando Martinez For Curtis Granderson Be A Good Trade?

Share All sharing options for: Would Fernando Martinez For Curtis Granderson Be A Good Trade?

Given how much Fernando Martinez's value has apparently fallen, I feel pretty strongly that the Mets shouldn't seek to trade him. If there's any truth to this rumor, however, that the Mets are considering trading him for Curtis Granderson, I'll pack his bags. For all of you who want Carl Crawford for his range, Curtis Granderson is that range with power, upside, and a criminally good contract. Assuming he'll be 4 WAR per season, reasonable but almost baseline when you consider he's already had a 7 WAR season, he'd be a $42 million dollar value through 2013. 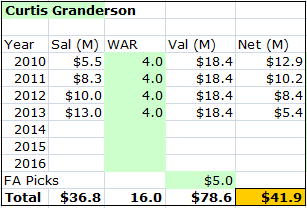 With injury concerns and unrefined plate discipline, Martinez is far from a sure thing. If you have the financial resources, how can you not trade the unproven prospect for the young established superstar? This is the kind of trade I thought the Mets could pursue after the Gomez/Hardy deal--one where they give up an equivalent player of long-term surplus value for someone more immediately helpful, but also young and affordable.

Granted, there are criticisms of Granderson. He strikes out a lot, kind of a non-sequitur when he hits so well. Granderson is also coming off a down year, due to a really bad split versus lefties. While last years' splits probably aren't representative of his skill level, the Mets have enough platoon-ready, lefty-masher outfielders to help him out (Francoeur, Evans).

Ultimately, I think Granderson is the long-term answer to Beltran's declining range. He's also a great clubhouse guy, for what it's worth. Matt Cerrone asked his readers a sort of similar question, but assuming the trade would go down as the original rumor, F!Bomb and Tejada for Granderson, would you do it?