Last season, Alex Cora was a replacement level player (literally 0 WAR), but earned $2 million. Many fans, myself included, came to loathe Cora, as he played horribly down the stretch. I didn't want him back at any salary. However, facing the very real possibility that the Mets will resign Cora, maybe for the exact same figure, I've reevaluated his play and slightly changed my position.

As a hitter, Cora looked pretty good at the beginning of the season. Many lauded his ability to work the count, and he did finish the year with a decent 8.4% walk rate. Through May 17, he had a .886 OPS, then missed 2 weeks on the disabled list with a torn thumb ligament on his left hand. Instead of opting for surgery, however, he played through the injury as an everyday shortstop until August 12th, when he tore the ligament in his other thumb. From May 17-August 12, he hit .232/.290/.277. While I'm not suggesting his true talent is an .886 OPS and an injury dragged him all the way down to his final .610 mark, gripping the bat with one working hand probably negatively affected his performance. Going forward, I'd expect last year's performance with a little more power, somewhere in between his 2008 and 2009, ~.300 wOBA. As James texted me at 3 AM, that doesn't really pass the gut check with his career-wOBA being .290. Looking at his component skills, however, I think his BB% rate, which fluctuated a bit during his career as a regular, has made a sustained improvement, typical of a player of his age: 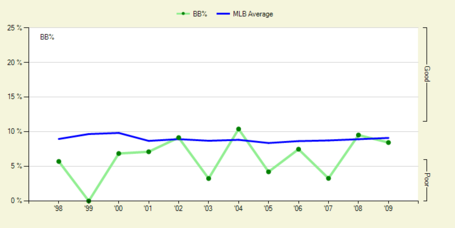 In fact, he might have matched his 2008 rate if he didn't exhibit such an uncharacteristic free-fall toward the end of the season: 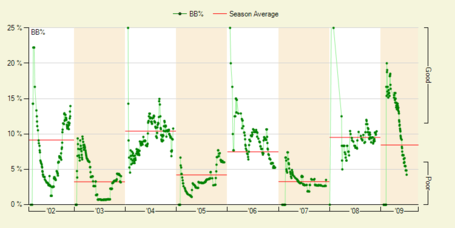 Again, this kind of improvement is not unusual for a a player of his age and skill set, and all I'm projecting is a repeat of his 2009 BB% with a slight increase in power.

Defensively, UZR rated Cora as below average at both SS and 2B, but we know in such small sample sizes, UZR can be an unreliable indicator of future performance. Jeff Zimmerman's age-adjusted UZR projections project Cora as a -1 UZR/150 defender at both SS and 2B. Given back-up duty, that would make Cora's fielding mostly neutral over the course of the season. As corroboration for that projection, check out Cora's defense according to John Dewan's +/-: 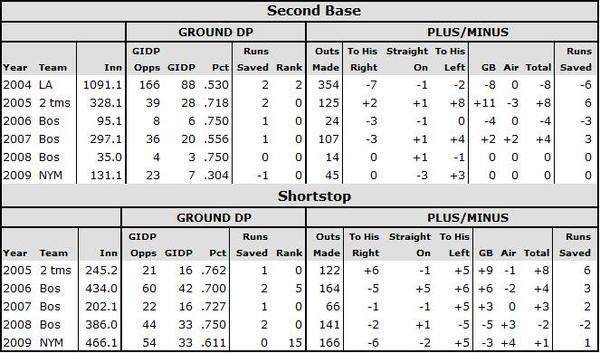 Considering the above, Cora's true talent as a back-up middle infielder is in the 0.5-0.7 range. While there are some utility infielders of arguably equal or better talent that get paid less, I won't complain if the Mets want to pay a slight premium for a player they think has an added intangible value.