No Holliday Or Lackey? No Problem!

Share All sharing options for: No Holliday Or Lackey? No Problem!

Bill Madden at the Daily News recently wrote that the Mets will be looking to cut payroll this offseason.  If true, this is bad news for anyone hoping to see Matt Holliday, John Lackey or Jason Bay in a Mets uniform.  Madden's estimate that there will only be $20 million available to spend on free agents seems a little low, but a $40 million estimate seems too high.  If none of the big three free agents are signed there would likely be an uproar from the talk radio faction of the Mets fanbase.  However, the offseason could very well be a success without signing any long term, ~$100 million contracts.

Working with a payroll around $15 million less than last year's ($147 million) I created an offseason plan.  This is not a personal offseason plan, i.e. what I would do in fantasy GM world. There are several offseason questions which appear to have all-but-certain answers. Jeff Francoeur and John Maine will be back. Jeremy Reed, Cory Sullivan and Tim Redding will likely not be back (at least on the major league Mets). Sean Green should and probably will be back but that's no lock. This plan considers all of these, as well as certain hot stove rumors, such as the team's desire to move Luis Castillo and interest in adding some power to the lineup. Here is the roster, including 2010 salary and conservative projected WAR: 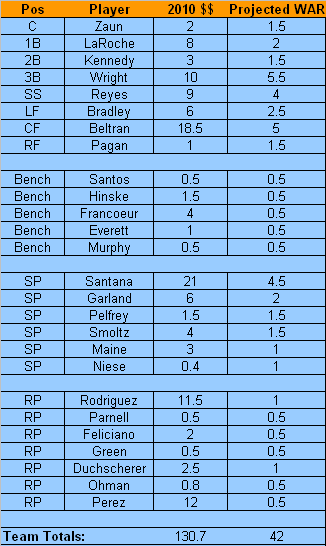 The first move is trading Castillo for Milton Bradley, with the Cubs picking up some of Bradley's salary.  His durability is a major issue but a corner outfield rotation of Bradley, Angel Pagan, Jeff Francoeur, Eric Hinske (signed for 1 year, $1.5 million) and even Daniel Murphy would keep everyone fresh and allow for platoon opportunities.

Castillo's replacement at 2nd base is free agent Adam Kennedy, for 1 year and $3 million.  This provides a defensive upgrade and a slight offensive downgrade.  Adam Everett is the new backup middle infielder, for 1 year and $1 million.  His UZR projection, per Jeff Zimmerman at BtB, is an outstanding +9 or +12 UZR/150.  Should Jose Reyes have trouble returning from injury, Everett can be relied on to play everyday.

Even at 38 years old, Gregg Zaun can likely be counted on for 1-2 WAR and a 1 year, $2 million contract should be sufficient to secure him.  First base was tough to determine, with Carlos Delgado and a Murphy/Nick Evans platoon also considered.  I'd like to avoid farm system draining trades for the likes of Adrian Gonzalez or Prince Fielder.  Adam LaRoche is almost a sure bet for 25 home runs, an .830 OPS and 140+ games played a year.  The same can't be said about the other free agent options (Nick Johnson, Russell Branyan) so LaRoche's stability is welcome in a lineup featuring some risks (Bradley, Pagan, Francoeur).  It would probably take a multi-year deal to sign LaRoche and 2 years, $16 million gets it done here.

Eric's post about free agent pitchers made me think a little more about Jon Garland, a pitcher I previously wanted no part of.  For 2 years, $12 million Garland would likely be worth more than his salary and provide some consistency (yes, consistency) to a staff that lacked it in 2009.  The other major pitcher signings are John Smoltz and Justin Duchscherer for relatively cheap.  Each has experience pitching out of the bullpen as well as the rotation and considering their age and/or durability issues this would help limit injury risk.  Duchscherer's listed salary might be a little low but keep in mind he hasn't pitched in a year and has some off-the-field issues.  Ben Sheets is also intriguing, and might be a smart signing when paired with someone reliable like Garland.  Will Ohman is included as a possible scrap heap signing but Adam Bostick is another option.  Kevin Gregg and Bob Howry are two other free agent relievers worth tracking.

This looks like an 88-93 win team, depending on how Reyes and Santana rebound, and whether the Smoltz and Duchscherer signings pan out well.  If the Mets reduce payroll this drastically there would be justifiable outrage from the fanbase.  However, the main point of this exercise is to demonstrate that Omar Minaya and the front office can have a successful offseason without making any big splash signings.  Taking risks on low-cost, high-reward players and not overpaying players coming off career years (see: Randy Wolf, Jason Marquis) are two ways an offseason without Holliday or Lackey can work.