The Mets have had nineteen managers in their 48 year history, from Casey Stengel, who helmed the incipient mess of the early sixties, to Jerry Manuel, who gangsta-fies the current bloated injury-fest. Davey Johnson has managed the most games (1012); Mike Cubbage has managed the fewest (7). Two have managed for parts of seven seasons (Johnson, Bobby Valentine); four have managed for less than one season (Cubbage, Salty Parker, Roy McMillan, Frank Howard).

Here is a chart of the winning percentages of all nineteen managers, from lowest to highest. 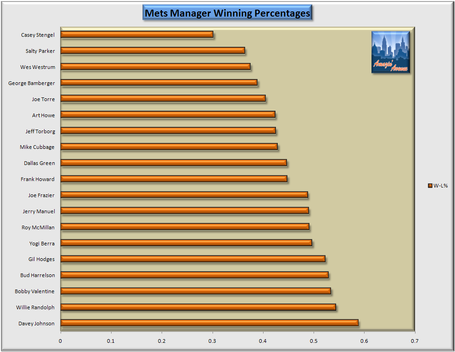 We all know that a manager is really only as good as his players. Davey Johnson's players were great; Casey Stengel's were woeful. Considering the discourteous manner in which Willie Randolph was let go two seasons ago, and considering how unfavorably he seems to be remembered by Mets' fans, the man owns the second-highest winning percentage in team history, sandwiched between Met Rushmore skippers Valentine and Johnson.