Take this post for what it is, subject to change and wishful thinking. I intended this plan to be realistic in the sense that all the trades and signings are possible, but not realistic in that I think it's what the Mets will actually do--that's another post for another time. So without further ado: 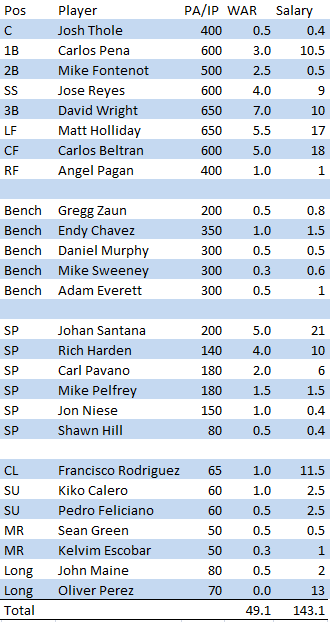 On the hitting side, the lineup has patience, power, speed, and contact skills without any obvious holes. Never watching that squad would I think, "here's Santos-Cora-Valdez, 1-2-3." The bench re-emphasizes defense, something severely lacking from last year's backups, and features all players good enough to start on some team, but who aren't expecting starting jobs. Of the 26 players listed, 8 could be considered rotation candidates, which gives flexibility on who makes the opening-day roster and in case of an injury, no Pat Misches or Livan Hernadezes have to start. There's no obviously crappy reliever who fits in under the guise of "long man" but has no other usefulness or upside. Most importantly, this roster allows the AAA class of prospects (Davis, Martinez, Mejia, and Holt) to stay in AAA as depth options or emergency trade candidates, in case Harden, Pavano, Maine, and Hill all blow out their elbows. I could see 95 wins, and with good health, the upside for much more. Now go wild with your own proposals.