With the 2009 season done and over, it's time to start handing out hardware. I present to you the first annual Gangsta and Grission Awards. Some of the categories had very tight races, while others were as one-sided as the Imperfect Game. The votes are in, however, and all winners receive as a way to remember their achievements, a Golden Jerry. 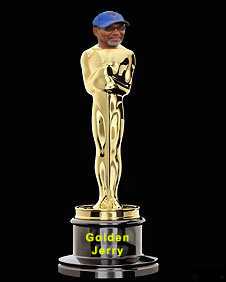 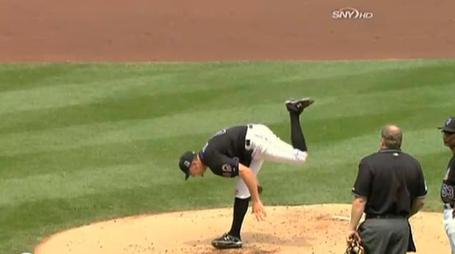 On August 5th at Citi Field, Jonathon Niese started a game against the Cardinals. In the second inning, he ran over to cover first base, entering into a footrace with Joe Thurston to beat him to the bag. Angel Berroa's relay to 1st caused Niese to hyperextend his legs, leading to a hamstring injury. He returned to the mound to throw a couple of warm-up pitches to test his leg, and as he landed after tossing his first warm-up pitch, his hamstring literally tore from the bone, causing him to collapse in a heap of pain.

In a season that was otherwise encouraging for Castillo, he made a single boneheaded move that negated all of his improvements from 2008 for many, many fans. On May 20th, Alex Rodriguez stepped up to the plate in the ninth inning with two outs, and the winning run on base. Francisco Rodriguez induced a simple pop up, something that seemed routine, until Castillo, at the last moment, seemed to realize that his body was not where he wanted it to be. The simple pop up glanced off of his glove, allowing the winning run to score, and Alex Rodriguez was mobbed at first base for hitting into what would have been a rally-ending pop up. 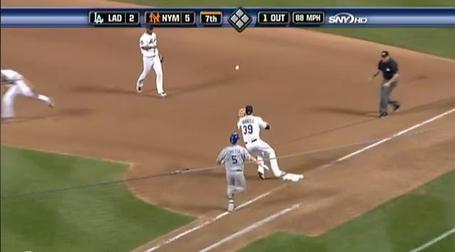 On July 8th at Citi Field, Mark Loretta hit a scorching grounder down the first base line. As Daniel Murphy was lining himself up to catch it, the ball hit the base itself, shooting upwards. As Bobby Parnell was running over to cover first, Daniel Murphy tracked the ball down, grabbed it barehanded, and flipped it behind his back, over to the covering pitcher who successfully caught it a few inches before Loretta touched the bag. 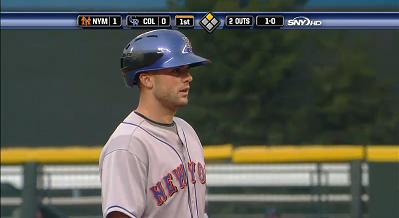 In the first half of the 2009 season, Tony Bernazard nearly got into fights with Francisco Rodriguez, a Diamondbacks scout, and a handful of Binghamton Mets. In that latter confrontation, he went as far as to take off his shirt. I'm not exactly sure what good that does, but it sure is grissiony.

No doubt about it, Alex Cora and Jeff Francouer endeared themselves to Mets fans everywhere because of the passion they displayed on the field, the dirty uniforms that they had to launder day in and day out, and all of those other intangibles that you can't possibly quantify, but definitely result in championship caliber teams (see Philadelphia Phillies). Both were injured during the course of the season, but both refused to be put on the DL, because they wanted to help their team THAT much. It'd be impossible to determine which of the two had more grission, so instead of even trying, I decided to combine the blood, sweat and tears of both Cora and Francoeur into one massively grissiony player - Alff Francoura.

In a game that didn't particularly mean much (we were 15 ½ games back), but a game that was against the Phillies nonetheless, Oliver Perez certainly pitched some game. Jeff Francoeur lining into that triple play in the ninth overshadows Perez' grissionest performance of the season, but it certainly was a game that was worth paying Perez those big bucks that we're paying him. He only walked two! Sure, he only lasted two outs, and gave up 6 earned runs, but until Jerry came to take him out of the game, he fought through being a crappy pitcher to the best of his abilities. If that's not grission, I don't know what is.