Lookout Landing did a series of these "point of contention" articles earlier in the offseason, and I thought it would be a good way to flesh out some issues I had been thinking about.

Jeff Francoeur won a gold glove in just his third season, at age 23, and has probably the best throwing arm in baseball. Yet, mostly due to the newfound popularity of MGL's UZR stat, Francoeur's defensive reputation among fans has suffered. Looking at his UZR numbers at fangraphs, it's understandable why: his Range component has gradually declined, while his best year, 2007, features an Arm rating so high it can easily be written off as an outlier. Thus, many have concluded that Francoeur is declining as a fielder, and his best years were kind of fluky to begin with. For a super-athletic 25-year-old, however, such a decline is pretty unbelievable. Consider some different, but similar measures:

*Didn't qualify for leaderboards in 2005

This table shows his UZR, his John Dewan runs saved, based on the equally popular plus/minus and featured in the annual "Fielding Bible," and Tango's fan scouting reports. In parentheses is his rank relative to the rest of the league. In general, the three measures agree, up until 2009, which is of course the most important year for projecting future performance. Looking at his Dewan's runs saved, however, the narrative often applied to his UZR doesn't really work. The Dewan numbers, mostly because they rank him +8 in 2009, make 2008 look like an outlier, not the beginning of a decline.

UZR and the Field Bible numbers are, by MGL's own admission, calculated in much of the same way. The main difference, as I understand it, is Dewan measures the ball's position relative to x-y coordinates, while MGL uses "bins" or small divisions of the playing field. So what accounts for the discrepancy here? In a single season, fielding statistics can fluctuate greatly; the rule of thumb is one season of fielding numbers is the equivalent of one-third season of hitting data in terms of significance and predictive ability. Often I called Frenchy's very poor UZR numbers with the Mets as "noise." Yes, it was a measure of how he had performed, but it was probably skewed by a few bad plays not indicative of his talent. Still, while Dewan's numbers tend to be higher than UZR, 14 is quite a disparity.

While further splitting up the data after talking about the unreliability of these stats in small samples may seem odd, here's how the two metrics compare in terms of range and arm: 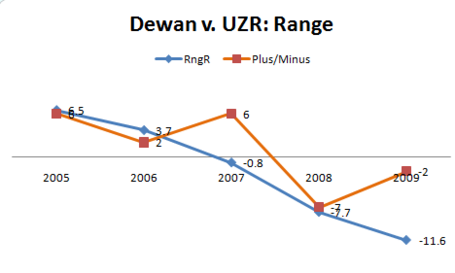 Here, the aforementioned UZR decline is evident, while the plus/minus numbers seemingly only fluctuate a bit, year-to-year. 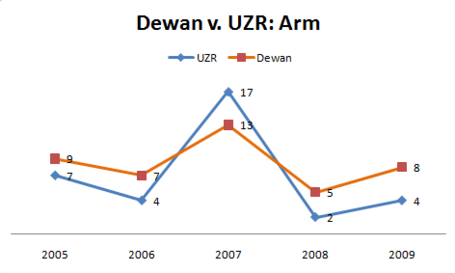 Also, here, the Fielding Bible data complicates idea that his 2007 throwing performance was a fluke. Talking to Mark yesterday about the numbers, he speculated that one system might be uniquely better at handling arm ratings, which would account for some of the difference. Just looking at this data, without any basis in the methodology, we might speculate that Dewan's system handles arms better. But that's just idle speculation really.

One last point of interest that Mark also brought up in the Jason Bay discussion, is speed scores, which are available in some form on fangraphs. Francoeur's speed score declined from his rookie season: 4.2, 3.8, 2.8, 2.8, until reaching 4.3 in 2009. This would seemingly support the idea that Jeff is in no way "slowing down."

The real take-away here, I think, is that it's dangerous to assign narratives to statistical trends prematurely. Jeff Francoeur has the track-record of a great defensive outfielder, and we can probably assume he'll be at least a good one going forward. And it's no small question, for with Francoeur's offensive game, the difference between being a -5 and 10 run rightfielder is the difference between fringe-player and solid starter.