Share All sharing options for: The Real Problem With The Mets (and why Mark DeRosa may be part of the solution)

These days, it seems fashionable to point out "the Mets only focus on last years problems!" and then turn around to talk about the need for a starting pitcher ceaselessly without the slightest hint of irony. Maybe I'm a contrarian, but the Mets have other, arguably bigger, problems than the rotation. The middle infield is being manned by two players with serious red flags on all four legs; one, while "healthy," was a -10 run defensive secondbaseman, the other hasn't ran full-speed in nearly 8 months. At two offense-premium positions are players with a recent track record of having their bats disappear for months at a time. And most, obviously, the Mets have no catcher or leftfielder. Ah, but that core. Here's my rough win projection for the incomplete squad:

So assuming better health, the Mets are 10 wins better, but certainly not contenders. Bengie Molina and Jason Bay add 4-6 wins, depending on how you project each player's controversial defense. That brings the Mets into the 85-range, a swing of good luck from the wild card, but not going to march over the NL East into the playoffs. So where is the room for improvement?

The rotation, certainly, but to what extent? Santana and Pelfrey occupy 2 of the 5 spots. Some assortment of Maine and Niese will be at the back end, with the potential of Niese being the second best-pitcher on the staff. So that leaves Perez's spot, and probably another. Call me crazy, but I'm not totally ruling Perez out, although a responsible team would. After he lost the life on his fastball, he's spent the offseason at the training facility famous for conditioning Huston Street's pitching arm.

Regardless, knowing the Mets, this team is one average (or worse) pitcher away from calling it a rotation. That, combined with a little blind faith they'll pull in Bay, makes the left side of the infield the most suspect part of the roster. Luis Castillo is a decent hitter, but a totally unacceptable fielder. Really, the difference between the Mets getting good or poor production from Pelfrey and some second-tier, contact-heavy free agent like Joel Pineiro is just accepting Luis Castillo is a bench player and signing a new secondbaseman. A glut of unwanted secondbaseman remains on the market, most of them pretty decent fielders. Orlando Hudson. Felipe Lopez. Miguel Tejada... Mark DeRosa?

For these reasons, though, I'm not totally opposed to signing Mark DeRosa. Yes, he is a glorified bench player looking for a multi-year contract with starter money. At this point, however, just resign yourself to the fact the team is taking the video game approach to the offseason. In their eyes, they've found the best utility-infielder, back-up catcher, leftfielder, and catcher, and offered them all the most money in hopes of improving the team by brute force. Value be damned, if Mark DeRosa is the best bench player out there, the Mets will pay.

In fact, the bench might be a good place to add some wins. Most projection systems are hammering DeRosa's offense, but he's a late bloomer, coming off a laundry list of nagging and more serious injuries. Interestingly, the fans at fangraphs have projected him well above the usually optimistic Bill James projections. It's especially surprising because he's a free agent who has played for several teams recently, making me wonder which fanbase so fervently supports Mark DeRosa. Still, I like ~.340 wOBA as an offensive projection for the healthy DeRosa. Defensively, he is about a -7 defender at second, not good, but passable and better than Luis Castillo. Remember, Joel Pineiro survived with a similar player in Skip Schumaker at second last year.

To make it really work, I'd pair DeRosa with his left-handed clone, Kelly Johnson. Each could be used as a plus-defense back-up outfielder with infield experience and the upside of a starter's bat. Writing Castillo out of the picture completely, I would arrange the lineups like so: 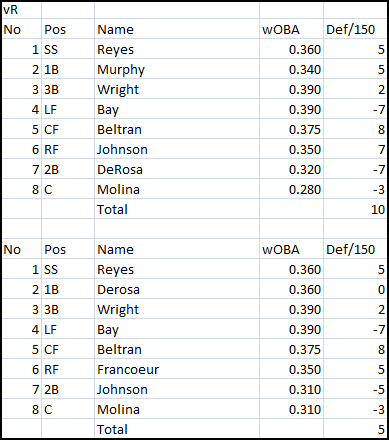 It's a 3-position, 3-person platoon that optimizes defensive specialties and platoon splits!

Now you think I'm playing fantasy baseball, but if the Mets sign DeRosa, I could see a very similar situation. It would be characteristic of management to use DeRosa versus lefties in the ever-baffling Murphy-platoon idea, and Jerry would be eager to rest Castillo for a better hitter (he even tried Tatis there last season). And I haven't yet mentioned his grit and playoff beard!